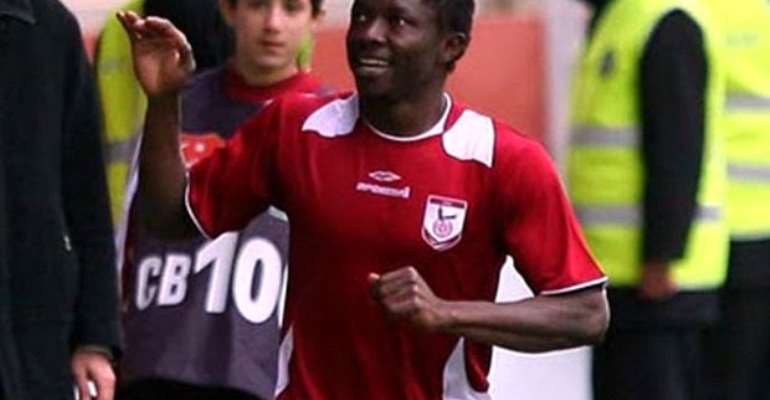 By Akyereko Frimpong Manson
Follow Akyereko on Twitter: @ Akyereko
Ex-AshantiGold striker Shaibu Yakubu scored for a first-half equaliser for 1461 Trabzon in their 2-2 home stalemate with Mersin in the Turkish second-tier league on Saturday afternoon.

The 27-year-old got Trabzon back into the game after bizarre start when Goksu Alhas scored a 12th-minute own-goal to hand the lead to the visitors at the Fatih Stadyumu in Akçaabat.

Shaibu raced clear of his marker to knock the ball on the 20th minute mark to equalise for Trabzon but Mersin took the lead once more midway through the break when Anil Karaer took advantage of a defensive blunder to score in the 66th minute.

This was Shaibu's second goal of the season which returning to Turkey from Cypriot side Enosis. Shaibu, who was a prominent member of the 2004 Ghana Olympic squad along with local stars Charles Taylor, Kwadwo Poku and Bernard Don Bortey, has a resounding popularity in the Turkish second-tier league.

As, he scored 14 goals in a single season for Kartalspor in the 2009/10 season before leaving to join Greek side OFI Crete.

While Shaibu was in action for Trabzon, former Hearts of Oak whizkid Torric Jebrin watched the game from the stands as he has suffered an injury.