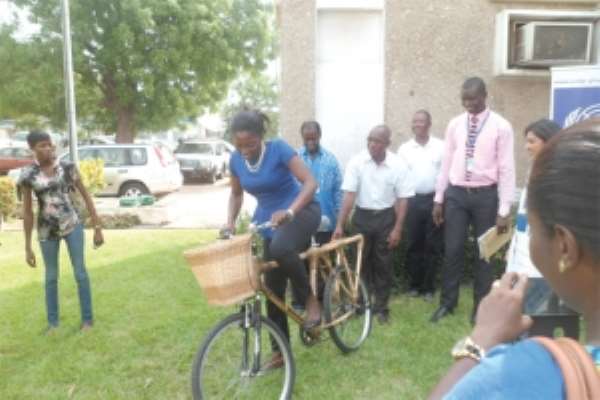 The honour recognises top global academics, executives and public figures under the age of 40.

Conferred each year to recognise the top 200-300 young leaders under the age of 40 from around the world for their professional accomplishments, commitment to society and potential to contribute to shaping the future of the world, the achievement has built on several milestones since its inception.

This year, Ms Dapaah from Kumasi, the Ashanti Regional capital, had been given the honour to represent the interest of young men and women on issues affecting them.

Under her leadership, the Ghana Bamboo Bikes was nurtured, as an initiative from a project idea which she pledged as a commitment project of President Clinton's Global Initiative University.

She has won several awards and participated in a number of programmes which propagate the interests of the youth across the world.

In 2013, Ms Dapaah's bamboo bike was displayed at the UN head office in Accra. Responsibilities as WEF leader

She will serve a six-year term as the WEF leader, and is expected to participate in the global and regional meetings of the WEF on research and initiatives, representing the views and interests of young leaders. Awards

Apart from her work with the Ghana Bamboo Bikes Initiative, funded by the Global Environmental Facility Small Grants Programme (GEF SGP), implemented by the United Nations Development Programme, Ms Dapaah is a member of the WEF Global Agenda Council on Biodiversity and Natural Capital.

She, as a result, sits on the board of advisors of five international organisations, including World Intellectual Property Organisation Green (WIPO Green), and serves as the national coordinator of Ghana's National Free Shoes and Educational Supplies Programme which complements the government of Ghana's free school feeding and free uniforms programmes by distributing free shoes and educational supplies to needy schoolchildren in deprived communities in Ghana.

“The YGL community assembles the world's most outstanding next-generation leaders who have a proven record of extraordinary achievement and helps them further develop in their leadership journey,” the Managing Director and Head of New Champions at the World Economic Forum, Mr David Aikman, said in a release.

“The community provides its members with a peer network that challenges them to not only do more, but to be more. Being part of the YGL community is a transformational experience, where leaders turn their personal success into global significance and positive impact in their countries, industries and areas of expertise,” he added.

To show her readiness to serve, the proud winner said “Being recognised by the World Economic Forum as a Young Global Leader is a huge honour, given the rigorous nature of the selection process and the exceptional calibre of entrants from across the globe. I fully embrace the opportunity to become partners with many of my fellow Young Global Leaders as we contribute our quota to solve some of the most pressing challenges of the 21st century.”

Place Rawlings on positive side of Ghana’s political history...
12 minutes ago