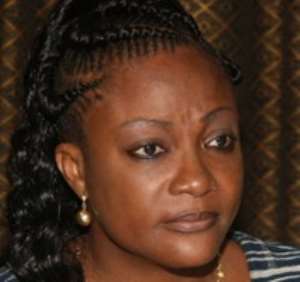 I am sad and I have every reason to feel so. I always feel a sense of disgust and shame when I come across people whose stock in trade is to destroy others to pave way for their own successes. Such people know that deep down in their heart and if all things remain same and their credentials are put on the table, there is no way they can be ahead of their competitors. They therefore resort to the use of unorthodox means by peddling vicious and unfounded allegations against their betters. Such people overlook the fact that there is a Supreme Being who oversees the affairs of everybody and will surely reward them on the day of reckoning.

Tina Mensah, former unelected Deputy Women's Organizer of the New Patriotic Party has played an ignoble role and will surely reap the whirlwind. You just mark my words. I have been under extreme pressure to hold my fire. But after some period of reflection, I have decided to give a fitting response to the vicious campaign of calumny she is embarking on against her former boss. There is a saying that he/she who will destroy others in order to succeed will surely find destruction waiting for him/her at her point of success. I wish this would not come true in Tina's case. But who am I to go against the happenings of nature? This is a long held tradition and any one who goes against such natural order will surely reap the repercussions of his/her action.

But who is this Tina Mensah at all? There is just one simply word to describe her, but I am not going to say it because The Holy Bible admonishes us not to judge others. So, I will spare her my verdict which is the people's verdict. But what I will say is that she was the un-elected Deputy Women's Organizer of the New Patriotic Party who was foisted on Otiko Djaba, National Women's Organizer as her Deputy. One would have expected her to use her new found position to assist her boss to enact and implement policies that would lead to the empowerment of our women folk. But not Tina Mensa! She used her newly found position to malign and thwart all the noble and pragmatic policies of her immediate boss.

Fearing exposure, she relinquished her unelected Deputy women's position to contest one of the seats that came into being when the former Weija Constituency was split into three. But as the saying goes, nature does not allow any vacuum and as it was in the beginning, so shall it be in the end. Has she bothered to ask herself why she was the only one from the three NPP stocks who lost the election? The answer is obvious. I am not going to say it. You can deduce the reason for yourself.

The antics of Tina Mensah brings back to some of us what one time Deputy Governor of Lagos State, Kofoworola Bucknor Akerele did to her then boss, Chief Bola Tinubu, Asiwaju of Lagos and former Governor of Lagos State. The former got estranged from her boss as a result of her desperation to become Governor without waiting for the natural order of succession to take effect.

She leveled a lot of vicious and unfounded allegations against the Governor amongst which were “ denial of wardrobe allowance, back-up car, non-payment of salary of personal staff, cutting of appropriate approved appropriation for her office, and deliberate humiliation of herself and status of office”. The mother of all the vicious propaganda was her claim that she had been locked out of a cabinet meeting. She sat in front of the office where cabinet meetings were normally held and put a call through to some press men and women who rushed to meet her weeping in front of a locked door where Cabinet Meetings of Lagos State Government were held. She told the Press that the meeting had ended and the participants had all left. It was later found out that the whole incident was stage-managed to paint her boss black before the people.

But what goes up must surely come down. In the end, she was impeached and that brought her political career to an abrupt end. But what happened to Asiwaju Ahmed Bola Tinubu? The just shall live by faith. He is now the “owner” of a new political bride who is being wooed by almost every political entity that matters in Nigeria. He is the National Leader of All Progressive Congress which now has the potentialities to become the ruling party in the next General Elections in Nigeria.

As it was in the beginning, so shall it be at the end. So for Tina Mensa to come out to tell the party that because Otiko Djaba and President Mahama are cousins, the former cannot be loyal to the party is a statement which is dangerous, treacherous and unacceptable. Immediately I heard of it, I said to myself, “why, Tina? Is the contest a do or die affair?” I am not against Tina contesting the position with the incumbent. But what I am against is her attempt to use unorthodox and unrefined means to clinch that position.

What one expects Tina Mensah to do is to tell us what she used her "unelected" position as First Deputy Women's Organizer to achieve for the party. What are her credentials? Let her put them on the table as Otiko Djaba has already done. Otiko achieved a lot for our womenfolk and the Party during the four years she held sway as the National Women's Organizer.

What Tina has done is unforgivable and should be condemned by genuine supporters of the party. She has hit Otiko Djaba below the belt and should render an apology to her former boss. What does she hope to gain by descending into the gutter to tarnish the hard won reputation of Otiko Djaba?

If she does not retract her reckless statement, it will stand against Otiko that she is a traitor to the cause of the party. But between Otiko and Tina, who is a traitor? I leave the answer to your conscience. If Otiko Djaba is related to President Mahama by blood, what is wrong about that? Do we have a hand in choosing who our parents and relatives should be?

Which of the political parties does not have relatives scattered amongst the numerous political parties? Is the son of the late Peter Allah Adjetey not a strong believer in the doctrines of the NDC? You see, it is such callous and damaging comments that have culminated into Samuel Abu Jinapor, former Spokes person of Nana Addo Dankwa Akufo Addo, taking a premature retirement from active politics. What is wrong if I have brother in another political party? Did Nana Akufo Addo not have his cousin, Owuraku Amofa as a founding member of the Eagle Party? And did Nana not contest the parliamentary seat with Owuraku Amofa? Today, his cousin has seen the light and is back to his roots.

Mr. Kwesi Ahwoi, current Minister of Interior and his wife Ewura Abenaa Ahwoi were both my Economics and English Tutors at Abuakwa State College, in the early Seventies. Even though, I have criticized the Senior Ahwoi (Ato) on certain issues, I have maintained very cordial relationship with my former tutors. I accord them a lot of respect, even though we belong to different political camps.

Tina Mensa should desist from using cheap and irresponsible mantra to prosecute her campaign. She should tell delegates what she used her unelected position as Deputy Women's Organizer to do. This is the message we want to hear, and nothing else.

No matter how hard Tina tries, Otiko Djaba has joined the league of those like Nana Addo Dankwa Akufo Addo, Omari Wadie, Kwabena Agyepong, John Boadu, Sammy Awuku and many others – the gold fish in our party who have left indelible footprints in the annals of history.

I have always stated and will do it again. And it is that, in our efforts to get the Golden Fleece, we must not sidetrack the moral issues that go with it. Members of a Great and Disciplined Party of the caliber of the New Patriotic Party should not forget this cardinal principle of life.

Before I conclude this piece, I just have one simple question for Tina Mensah. And it is this. What did she leave at the office of the Women's Directorate of the New Patriotic Party that she is going there to retrieve? A sincere answer to the question will put the minds of genuine party members at ease.

Her anti democratic tendencies are tantamount to ripping out tongues, gouging eyes and hacking of hands as happened during the civil war in Liberia and Sierra Leone.

Otiko Djaba, the face of Hope in Election 2016 is the Amazon who will harvest votes from the women folk to clinch victory for the New Patriotic Party.

I won’t be an impediment to free, fair and transparent elect...
9 minutes ago