Angola faces difficulties in getting agriculture sector to grow 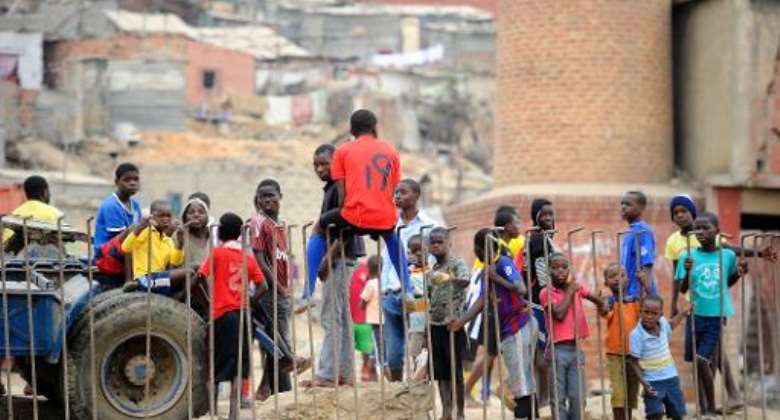 Some kids stand at the Boa Vista slum, in the outskirts of Luanda, on August 31, 2012. By Stephane de Sakutin (AFP/File)

Luanda (AFP) - Oil-rich Angola aims to roll out measures to boost productivity in its agriculture sector and curb its dependence on food imports, but there are concerns price hikes will harm the poor.

New import duties for selected products including fruits, vegetables, eggs and drinks are set to enter into force in March.

The government hopes that the new levies will discourage imports and prod domestic industries to diversify from oil.

Before its independence in 1975, Angola was an agricultural powerhouse known for its coffee and rubber production.

But nearly three decades of civil war that left vast tracts of land littered with landmines robbed the country of its farming prowess.

In the first nine months of last year, Angola spent over $3.6 billion on imported food and drinks alone, according to the trade ministry.

Authorities now want to lessen that dependence and encourage local production, which will hopefully eventually lower food costs in the country where two thirds of the population live on less than two dollars a day, despite the country's oil wealth.

However importers fear the new customs duties will push up the cost of some imported goods by a third, as well as the inflation rate which currently stands at 7.8 percent.

"This will lead to an increase in import costs of between 5 percent and 35 percent, which will have an impact on prices in general," said Federico Crespo, who operates an Angolan import firm Oxbow.

The dependence on imported goods is one of the reasons why Angola's capital Luanda is ranked among the most expensive cities in the world.

However one local business association appears to back the new import duties and suggests that if there are any increases in consumer prices, they won't last long.

"This is because local entrepreneurs will invest and produce to meet the demand," said Jose Severino, president of the Association of Angolan Industrialists.

In imposing the new duties, Angolan authorities say they are not aiming at a blanket ban on imports but want to "gradually replace" them with local produce and "develop our productive capacity", said Adriano Martins, director of the foreign trade ministry.

It order to limit the impact upon -- and possible angry reaction from the poor, staples such as rice, milk powder, sugar, cooking oil and others are exempt from the new duties.

However economists warn that protectionist measures are not the best way to encourage domestic production in Angola.

They argue that output will expand if production costs are lowered, and adequate energy and water supplies are guaranteed.

Despite efforts over the past decade to rebuild infrastructure destroyed by the war, Angola, sub-Sahara Africa's second-largest oil producer after Nigeria, has yet to get its house in order.

Analysts also note that offering protection to a mostly non-existent sector will likely benefit only a few long-established companies, often owned by people who have close links to those in political power.

"The law will protect the interests of companies that struggle to cope with competition through the reduction of production costs, that is to say, less dynamic and less efficient companies," warned Alves da Rocha, economic lecturer at the Catholic University of Angola.