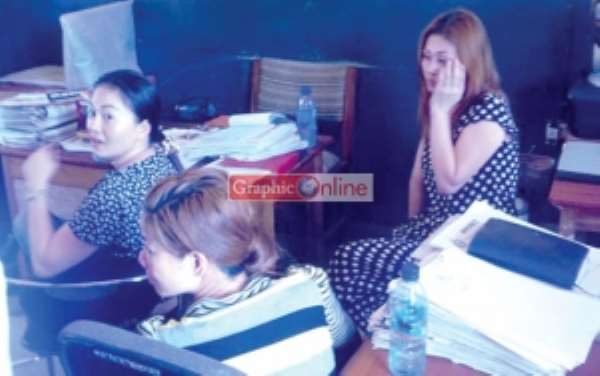 A human trafficking ring involving some Asians has been busted by the police in Takoradi.

The Anti-Human Trafficking Department of the Ghana Police Service arrested two Chinese for trafficking six Vietnamese into Ghana for prostitution.

The Takoradi Police have since rescued the six, who were said to have been trafficked into the country on the pretext of transiting Ghana to the United States of America.

They are currently in the custody of the Takoradi District Police Command.

The women were camped in a rented 12-bedroom apartment at Tadisco-Down, a suburb of the twin-city, which serves as a residential apartment, a nightclub and a brothel for those who could not afford to pay and camp the women in hotels.

Speaking to the Daily Graphic in Takoradi after the arrest of the Chinese, ASP Obeng Dickson, the officer in charge of the Western Regional Anti-Human Trafficking Department, said the police had information on the operations of the traffickers through Interpol.

The suspects, identified as Hwang Si Hui, 49, and Cz Tian Ping, 35, are also in police custody.

They are said to have brought in the victims to Takoradi, ostensibly for prostitution.

ASP Dickson explained that when the women arrived more than a year ago, they were camped in Tema for prostitution.

“After the first trafficker recouped his investment in bringing them into the country, the six were reassigned to two other Chinese, Si Hui and Tian Ping, to provide services for other nationals in the northern part of the Western Region,” he said.

After following intelligence carefully, he said, the police and National Security officials realised that the victims were in Takoradi and were being camped by the two suspects for prostitution.

“What they do is that when clients visit the house and select which of the girls they want to hire, the person is given a number of days to bring back the girl to the house in Takoradi,” he said. Cost per night

According to the police, the cost per night out or days of engaging the women was between $500 and $1,000.

The women looked young and were dressed in colourful dresses and hot jeans skirts when the security officials arrested them. Charge of abetment

He said the Ghanaian cook who was hired to cook for the victims had also been arrested on a provisional charge of abetment and was helping the police in their investigations.

The victims are expected to be transferred to Accra as a result of communication difficulties, since the police were finding it difficult to communicate with them because they could only speak Vietnamese. The victims

The victims, who looked visibly worried and continually wept, would not eat the food offered them apart from coke and water.

Reports also say the victims had been camped in the 12-bedroom apartment and not allowed to go out on their own since they arrived in the twin-city.