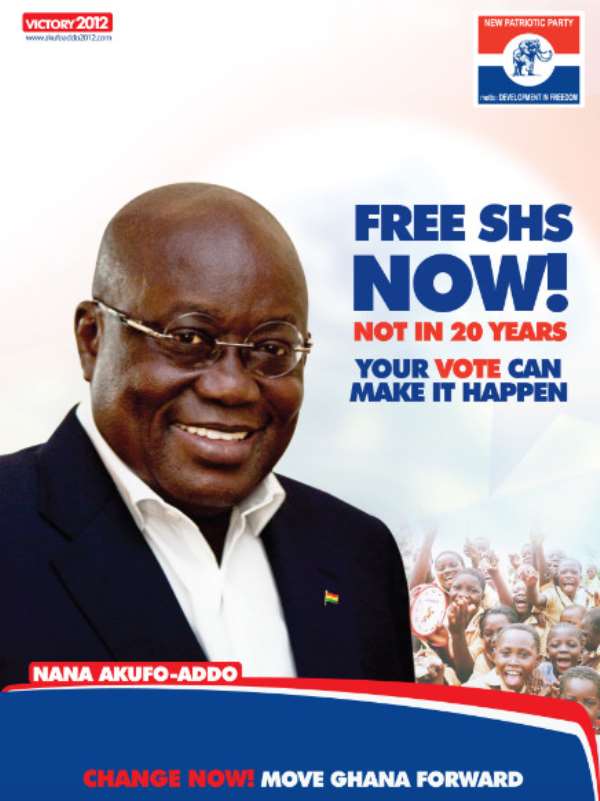 When Nana Addo Dankwa Akufo-Addo, the NPP Flagbearer was gasping for breath in the heat of the 2012 electioneering campaign and realized that all his flamboyant unrealistic promises were getting no political traction, out of the blue he shot out that he was going to provide free Senior High School (SHS) education when voted into power.

Suddenly the NPP apparatchiks started jumping all over claiming that Akufo-Addo has said or proposed something that has never ever crossed the mind of any Ghanaian politician, thereby making him a big time visionary.

The so-called free SHS education drumbeat therefore became the signature tune of Akufo-Addo with the erection of billboards with smiley faces of school kids all over Ghana.

Ghanaians who have never been privy to the 1992 Constitution of Ghana bought into the gambit of the NPP that Akufo-Addo was the first politician to promise free SHS education in Ghana.

When this deception by Akufo-Addo and Co. started gaining traction, the NDC countered by pointing out to Ghanaians that what Akufo-Addo was saying about free SHS education was nothing new, but that there was a provision for it in the 1992 Constitution.

I remember President John Mahama stating on different political platforms that the free SHS education being trumpeted by Akufo-Addo was not new and that Akufo-Addo was using it to cash in to deceive Ghanaians into believing that he was the first to propose it.

That eventually became history when Akufo-Addo's sinking sand campaign which was laced with one-dimensional campaign theme collapsed following his defeat in the presidential polls by President Mahama in the 2012 election.

The free SHS education suddenly popped up last week when President Mahama announced during the State of the Nation Address to Parliament that following consultations with stakeholders, the Ministry of Education has prepared a report on the road map for a progressive introduction of free secondary education in Ghana as required under the 1992 Constitution.

According to President Mahama, the road map would be presented to Cabinet for approval and subsequent implementation. Under the guidance of this proposed road map, it is anticipated that fees for day students will be abolished at an estimated cost of GHC71 million in the 2015/1026 academic year while other reliefs in respect of boarding students would be announced when the road map is published.

This announcement did not go down well with the NPP who are blabbing that President Mahama has stolen Akufo-Addo's campaign promise hence he is being disingenuous. If you do not follow political events in Ghana to the letter, you will be tempted to side with the NPP who are always out to throw dust into the eyes of Ghanaians for political expediency.

But if you are politically vibrant and know how the NPP folks operate and the way they move and misinform Ghanaians you can easily know what they are up to, especially when they know that NDC has consistently maintained that the announcement by Akufo-Addo concerning free SHS education was nothing new and certainly not his invention.

In political campaigns politicians make a lot of promises. But let's assume Ghanaians heard the promise of free SHS education from Akufo-Addo for the first time but he lost the ensuing presidential election. Are the NPP folks telling Ghanaians that until Akufo-Addo is elected president no other elected leader of this country has the right to implement free SHS education if even they are in the position to do so?

I think the NPP folks are not helping themselves by taking on fights that do not bring any meaningful development to the people of Ghana. They have virtually reduced themselves to “wounded tigers” by growling at anything that President Mahama does without offering any productive alternates.

Probably the NPP folks have gauged the country's political barometer to determine that just developing a “criticism market” and daily selling false rumours is a winning strategy. Otherwise one cannot understand why the NPP seem not to have learnt anything following their two defeats in the presidential polls of 2008 and 2012.

One thing that the NPP folks must get it straight off their heads is that Akufo-Addo is not yet close of becoming the President of Ghana. And as a result, the country cannot wait till he becomes president before the educational needs of the country are taken care of.

I remember Akufo-Addo promising that he was going to immediately start the implementation of the free SHS education if voted to power without providing the infrastructure base to take care of the excess students who would be enrolled.

Such backward approach to solve prominent issues confronting the country will never again fly. You do not put the cart before the horse. And Ghanaians are better informed to read into the gambit being spewed by the NPP.

The devil certainly finds work for idle hands. That is why the NPP folks have plenty of shoddy political work being floated by their leaders with the hope that those lies will eventually propel them into power.

I will certainly not blame you if you are in the habit of always counting your chickens before they are hatched. That is why two years before the next elections the NPP folks have already developed their master plan list of who is going to get what if they win the elections in 2016.