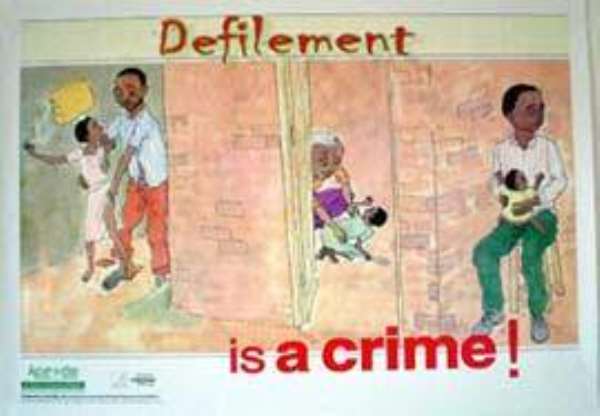 Accra, Feb. 25, GNA - Yussif Amuda, a trader who lured a 13-year-old pupil to a fitting shop at Adabraka and had sexual intercourse with her has appeared before an Accra Circuit Court.

Amuda has pleaded not guilty to the charge and has been remanded into lawful custody to re-appear on March 11, 2013.

The Prosecutor, Assistant Superintendent of Police (ASP) Sarah Acquah stated that the victim, a 13-year-old pupil lives with her guardian at Adabraka, while the accused also lives at Adabraka. The complainant, the victim's father lives at Adenta.

She said the accused is a family friend to the grandmother of the victim and sometimes visited the family.

She said in January, 2014, at about 9.00pm, the accused lured the victim to a fitting shop at Adabraka, threatened to kill her with knife and in the process had sexual intercourse with her.

ASP Acquah stated that after the act, the accused warned the victim not to tell anybody or else he would kill her with the knife.

She said on February 15, 2014 at about 4.00am the accused again lured the victim to a spot near the Adabraka Methodist Basic School and defiled her again. After the act the accused sent the victim home.

She noted that when the victim was questioned she narrated her ordeal to her father.

ASP Acquah stated that the case was reported to the Adabraka Police who referred it to the DOVVSU.

She said the victim was issued with a medical form to attend hospital where she was examined and treated and the accused was later arrested and charged with the offence.