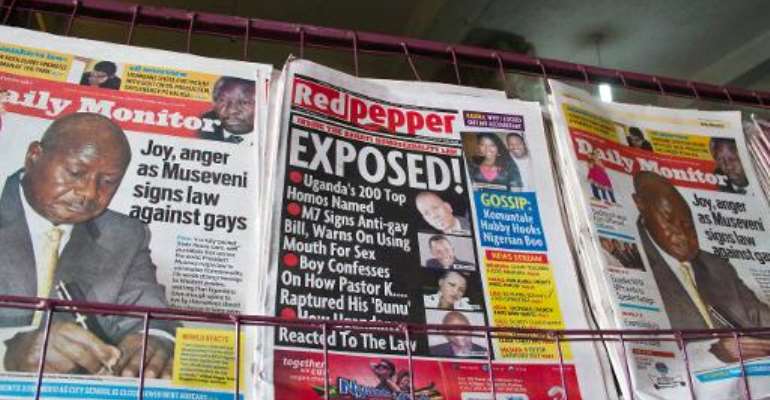 A newspaper stand in Kampala displays Uganda's local dailies on February 25, 2014, a day after the president signed a tough new anti-gay law. By Isaac Kasamani (AFP)

Kampala (AFP) - A Ugandan newspaper listed Tuesday 200 people it accused of being gay, a day after the president called homosexuals 'mercenaries' and signing one of the world's toughest anti-gay laws.

"Exposed!" the headline of the Red Pepper tabloid read, beneath photographs of Ugandans it said were gay, as well as reporting on lurid stories of alleged homosexual actions.

"Uganda's 200 top homos named," the daily newspaper added, which listed both those who have openly declared their sexuality as well as those who had not, including gay rights activists, priests and music stars.

"In salutation to the new law, today we unleash Uganda's top homos and their sympathisers," the newspaper added.

In 2011, prominent Ugandan gay rights campaigner David Kato was bludgeoned to death at his home after a different newspaper splashed photos, names and addresses of gays in Uganda on its front page along with a yellow banner reading "Hang Them".

On Monday, President Yoweri Museveni signed a bill into law which holds that repeat homosexuals should be jailed for life, outlaws the promotion of homosexuality and requires people to denounce gays.

Museveni said he could not understand how one could "fail to be attracted to all these beautiful women and be attracted to a man" instead and described in graphic details his particular revulsion to oral sex.

"There is something really wrong with you," Museveni, a devout evangelical Christian who has been in power nearly three decades, said of gay men.

The signing of the law came despite fierce criticism from Western nations and key donors, including US President Barack Obama, who has warned that ties between Kampala and Washington would be damaged.

The bill will provide a stiff test for foreign donors, with Museveni warning Western nations not to meddle in the east African nation's affairs, and that he was not afraid of aid being cut.

Some donors were quick to punish Kampala by freezing or redirecting aid money.

The Netherlands froze a seven-million-euro subsidy to Uganda's legal system, while Denmark and Norway said they would redirect around six million euros each towards private sector initiatives, aid agencies and rights organisations.

Sweden's Finance Minister Anders Borg, who is visiting Uganda for meetings on trade and economic issues, has met with gay rights activists.

He told reporters in Kampala the law was a "serious violation of human rights" and that it "presents an economic risk for Uganda".

Prominent Ugandan gay activist Jacqueline Kasha posted photographs of the newspaper's front page on Twitter, warning that the "media witch hunt is back".

Homophobia is widespread in Uganda, where American-style evangelical Christianity is on the rise.

Gay men and women in the country face frequent harassment and threats of violence, and rights activists have reported cases of lesbians being subjected to "corrective" rapes.

But the passing of the bill has been popularly received in Uganda, where Museveni -- in power for 28 years -- faces reelection in 2016.

Ben Shepherd, of Britain's Chatham House think tank, noted there is "very little downside" for Museveni in passing the bill.

"He will face criticism from human rights groups, and even the loss of some donor funding," he wrote.

"But he has not enjoyed warm relations with either for some time, and any loss would almost certainly be more than off-set by a much needed domestic bounce."