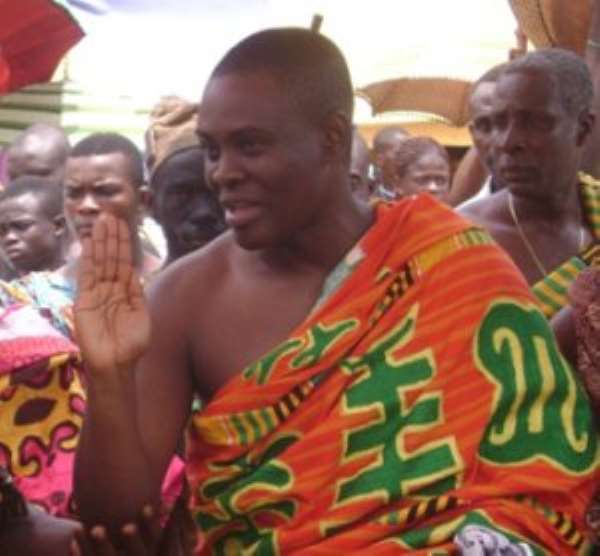 The General Manager of the Presbyterian Health Service in Brong-Ahafo region, Mr. Fred Effah-Yeboah has petitioned the Moderator of the General Assembly Presbyterian Church of Ghana over the purported banishment and a threat on his life by the Dormaahene, Osagyefo Oseadeeyo Agyeman Badu.

In the petition dated February 19, 2014, Mr . Fred Effah-Yeboah, alleged that Osagyefo Oseadeeyo Agyeman Badu had given him an ultimatum, as the General Manager of the Presbyterian Health Service, to leave the Dormaa Traditional area, latest by 12 noon on Monday February 24, 2014.

According to the petition, the Dormaahene has ordered his royals to deal with him anyhow that would please them, claiming that the Dormaa stool can kill a human being, and no one dare question that.

The letter indicated that the Dormaahene gave the ultimatum and made the alleged life threatening statement at the Dormaa Palace on Monday February 17, 2014, between 10:00am and 1:00pm, when he sat in state, surrounded by his divisional and other sub-chiefs.

Oseadeeyo Agyeman Badu refused to make any comment when The Chronicle contacted him on the phone. According to him, he would, at the appropriate time, come out to state his side of the story.

But according to Mr. Effah-Yeboah's petition, the Dormaahene also categorically stated that he had dissolved the Area Board of the Presbyterian Health Service in the Brong-Ahafo Area, on the basis that he, as Paramount Chief, ought to be automatic chairman of the Board.

Osagyefo Oseadeeyo Agyeman Badu further directed that, the Aduanahene of Dormaa Traditional Area, Barima Yeboah Kodie II, should henceforth be the chairman of the Area board in his stead.

The General Manager named some of the Area Board members, who were present at the palace during the entire episode, as Rev. Hayford Dwamena Asirifi, Dormaa-Ahenkro District Presbyterian Church of Ghana Minister, Rev. Mavis Hannah Yeboah, Chaplain, Presbyterian Hospital Dormaa-Ahenkro, who doubles as the Director, Development and Social Services, West Brong Presbytery.

Others were; Mr. Herbert Morrison Agyei, Retired Regional Accountant of Ghana Education Service and Private Businessman and Barima Yeboah Kodie II, Chief of Aboabo No. 3, Aduanahene of Dormaa Traditional Area and the Traditional Council's representative on the Area Board.

Also present at the palace at the time was Rev. John Felix Yeboah, the newly elected Regional Chairman of the Assemblies of God Church, who is also the Chairman of the Local Council of Churches in Dormaa-Ahenkro.

Mr. Effah-Yeboah further indicated that Dormaahene categorically stated that the Dormaa-Ahenkro District Minister and the hospital chaplain should send the message to the Area Board Chairman, Rev. Dr. Kofi Effa Ababio in Berekum.

According to Mr. Effah-Yeboah, he was compelled to bring the issue to the attention of the Moderator's High Office for subsequent action on account that the Dormaahene, Osagyefo Oseadeeyo Agyeman Badu, is a qualified lawyer, a member of the Ghana Bar Association and a High Court Judge, who by all standards is not ignorant of the laws of the Republic of Ghana.

'Indeed, by his position in the country, he is mandated to interpret and apply the laws of the land to bring a distinction between what is legal and what is illegal', he stated, adding that his position as a High Court Judge was also to enable him promote the rule of law and to dispense justice.

To him, it was mind boggling that a person with that background would attempt to banish him and order his royals to deal with him anyhow, and asserting that 'the Dormaa stool can kill a human being without questioning.'

Mr. Effah-Yebaoh emphasized that, he finds the order to the Dormaahene royals to deal with him as a threat to both his natural and constitutionally mandated right to life, barring death of natural cause.

'My purported banishment is an attempt by the Dormaahene, Osagyefo Oseadeeyo Agyeman Badu, to prevent me from discharging the legitimate mandate assigned to me by the Presbyterian Church of Ghana, having been duly appointed and inducted to office, and having been given specific charge as the General Manager and Supervisor of the Presbyterian Health Service in the Brong-Ahafo region,' he stated.

According to him, the purported dissolution of the Area Board, which was duly constituted by the Presbyterian Church of Ghana and appropriately inducted into office by the Clerk of General Assembly, represents an unwarranted interference in the Church's internal Administration and the usurpation of the authority of the church.

He further stated that as far as his memory can serve him right, he had no issue with Osagyefo Oseadeeyo Agyeman Badu, and was also not privy to any complaint brought against him by the Dormaahene to any of his superiors.

He, however, thinks that as a General manager and the head of the Presbyterian Health Services in the Brong-Ahafo Area, he had attracted the displeasure of the Dormaahene, owing to the construction of a mortuary for the Presbyterian hospital at Dormaa-Ahenkro, which started operating on Friday December 27, 2013.

He stated that since the hospital's own mortuary came into operation, it has totally overshadowed the Dormaahene's mortuary, which is also located on the hospital premises.

The General Manager said he felt strongly that as the appointee of the church, this unwarranted attack on his person, office and work, was by extension an attack on the Church in General.

He stated that by Osagyefo Oseadeeyo Agyeman Badu's pronouncements and actions, the Dormaahene has incited the youth in the area, who are loyal to him and thus making the environment unsafe, not only for him but the entire staff of the Presbyterian Health Service and persons close to him.

'This is evidenced by the attack on Gifts FM, a local Radio station, which transmitted the news about my purported banishment to Adom FM in Accra, when the news broke,' he noted.

Fred Effah-Yeboah alleged that the Dormaahene had at the meeting given orders to the youth to deal with any media house that transmitted news which tarnishes the image of the Dormaa stool.

He appealed that Dormaahene should be engaged at a higher level to bring him to order, adding that such an action was necessary for a lasting cooperation between the Dormaa Traditional Council and the Presbyterian Church of Ghana, to promote the health and wellbeing of the people of Dormaa.

He recounted some of the events leading to the banishment, that on Thursday February 6, 2014, a BNI staff visited the hospital and was conducted round both the Hospital mortuary and the Dormaahene's Mortuary, on the basis that some youth in town were aggrieved that the hospital had blocked access to the Dormaahene's mortuary.

The findings of the BNI staff were contrary to what the youth were saying, hence the BNI person asked the hospital authority and staff not to be alarmed.

Unfortunately, at about 7:10am on Friday February 7, 2014, the attendant of the Hospital's mortuary, Anthony Asante Boateng called the Administrative manager of the hospital, Mr. Ezekiel Amadu Daribi, that some young men and women were demolishing a wooden fence with a gate, which leads from the hospital to the Dormaahene's mortuary.

The administrative manager, after relaying the information to the general manager and calling the Municipal police Commander for intervention went to the scene with a Police man but returned later, barefooted and reporting that he and the Hospital's mortuary attendant had been assaulted by the group who were identified as persons close to the Dormaahene's palace.

The police reinforcement team came to the scene, met the perpetrators of the act, but failed to cause any arrest, which angered the hospital staff, being the third time that persons from the traditional council had assaulted staff of the hospital, and the OPD of the hospital was immediately closed down in protest.

'For security reasons, he (the General Manager) and the Administrative manager left Dormaa the same day, Friday February 7, 2014, separately, and both were away for one week.

The hospital management team members who attended the meeting with the divisional chiefs made it clear that they were only representatives and that the entire management would consider the apology and give feedback.

According to Mr. Effah-Yeboah, the hospital management was supposed to meet on Monday February 17, 2014, to review the entire situation and to consider the apology rendered by Nananom on behalf of the youth.

He said, all of a sudden, the Dormaahene, who was in Dormaa-Ahenkro over the weekend for a funeral, invited management of the hospital to a meeting on the same Monday February 17, 2014, at 10:00am.

He said the outcome of the meeting was the banishment of the General Manager and a threat on his life and the purported dissolution of the Area Board, hence the fear of the management was indeed confirmed.

The letter was copied to all stakeholders, including Osagyefo Oseadeeyo Agyeman Badu himself, the Brong-Ahafo Regional Minister, Paul Evans Aidoo, Regional Police Commander, Regional Director Ghana Health Services, President Regional House of Chiefs, the President Association of Health Services Administrators, all Members of Parliament with the Dormaa Traditional Area, and MDCEs and the Area Board Chairman, Presbyterian Health Service.