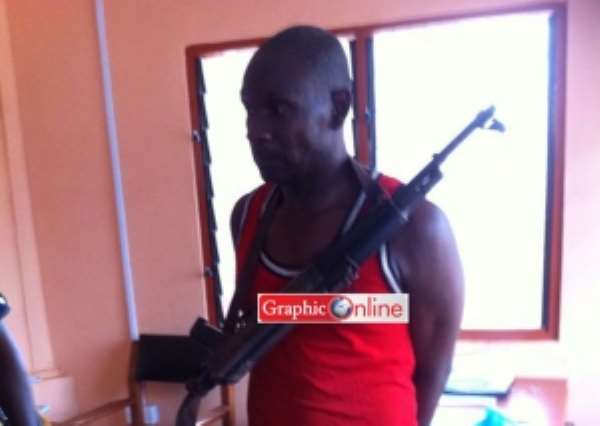 A 60-year-old man who is alleged to have killed 116 people over a period has finally been arrested by the Prampram Police.

The suspect, who had for years been threatening the people of Prampram, near Accra, is also said to have confessed to killing 116 people in his life.

He is Asshaku Adam, also called 116, a name he has appropriated to himself due to the number of people he claimed to have killed.

According to the police, Adam changed his identity from period to period, depending on the number of people he killed and where such killings took place. Contract killing

He is said to have bragged about being behind the mysterious killings of chiefs and other prominent people and going into hiding in Tamale after each operation for a while before striking again.

At the time of his arrest, the police believed that he had been contracted to kill one of the chiefs in the Miotso/Prampram area over a land dispute.  AK 47 rifle

The Prampram District Police Commander, Deputy Superintendent of Police (DSP) Mr Paul Mensah Bampoe, told the Daily Graphic that the suspect was arrested at Miotso/Prampram about 4:30 p.m. on Sunday, February 23, 2014 with an AK 47 rifle hanging at his back.

He said the suspect, who was riding a motorcycle, with registration number M-14-GR 1287, had two magazines of 58 live rounds of ammunition on him when he was grabbed by the police.  Patrol duty

Mr Bampoe said he was on patrol duty with the Greater Accra Regional Police Staff Officer, DSP Mr Eric Asamoah Asiedu, who was visiting the Prampram Police, when they saw the suspect in an attire which looked like the camouflage uniform of the Ghana Immigration Service.

Explaining the circumstances that led to the arrest of the suspect, Mr Asiedu said because the motor rider was displaying the rifle in broad daylight, he and the Prampram Commander became curious to know who he was, but when “our car got closer to his motor, he sped off and we gave him a hot chase”.

While they were chasing the suspect, Mr Asiedu said, Adam tried several times to remove the gun which was hanging around his neck “but he could not”.

After chasing Adam for about 500 metres, the police hit the motorcycle with their car.

The suspect then fell off the motorcycle, “but immediately he fell he tried to get hold of the rifle which had then fallen off from his neck and tried to cock it”.

“One of us stamped his foot on the suspect's hands, while the other grabbed him, having sustained injuries after he had fallen down,” Mr Asiedu said.