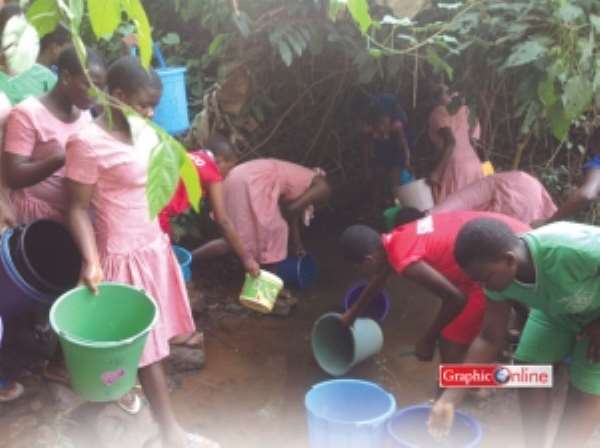 Clean drinking water is a scarce commodity that has, for years, remained out of the  reach of the students of Hark Mount Sinai Senior High School at Akuapem-Akropong in the Eastern Region.

The acute water problem has compelled the students and management to resort to purchasing sachet water for drinking and using water from a stream for bathing and  chores like washing clothes.

The problem is adversely affecting teaching and learning as well as cooking of meals in the school.

Besides, the situation is compelling the students to wake up as early as 4 a.m. to walk long distances to fetch water from two streams which are also used by pigs.

The students also have to trek the same distance to collect water from the streams in the evening after school, a daily drudgery which makes life unbearable for them.

When the Daily Graphic visited the institution at about 3 p.m on Wednesday, a number of the students, with all types of buckets, were seen walking from their dormitories to the streams to get their share of the scanty commodity. Poor water quality

The Headmaster of the school, Mr Samuel T. Siameh, told the Daily Graphic that access to potable water had remained “a major problem facing the school for years”.

“The water the students fetch from the two streams is not the best but because they have no alternative they have to use it,” he stated.

The senior housemaster, Mr Reuben K. Tordzro, added that “water from the streams may contain some impurities that could be harmful to students, especially those with sensitive skin, some of whom itch after bathing with it”. Disruption to school activities

“On many occasions when there was inadequate rainfall, the streams would dry up”, the headmaster said, and added that 'there is a complete disruption of every activity on campus, from breakfast to class and lunch as well as teaching”.

In his view, academic excellence thrived on discipline in every institution, including the school.

'The need for students to look for water has offered some of the students the opportunity to sneak out to town and it is extremely difficult to determine those who genuinely want to go and fetch water”, the senior housemaster said.  Dysfunctional boreholes

The headmaster expressed gratitude to the school's PTA and a philanthropist for funding the construction of two mechanised boreholes and a treatment plant to address the water problem.

'However, the two pumping machines that pump the water from the boreholes are currently dysfunctional, since the water is highly contaminated with iron,” he stated.

'Because of the iron content, the pump keeps breaking down and getting rusted and they are expensive to buy and repair,” he added.

He pointed out that until the boreholes were dug, the school was not regularly supplied water by the Ghana Water Company compelling the students to always rely on the stream source. Way out

Mr Siameh stated that at the time of the construction of the two mechanised boreholes, the school had no option than to utilise the available piece of land that were found to contain high concentration of iron.

“A man claimed the other piece of land the school had and  could use so the matter was sent to court.

“But today, the issue has been struck out in favour of the school and we now have the land, and we hope someday, the government or a corporate body will come and assist in digging boreholes,” he said.

Why appoint an AG-designate who’s interested in disenfranchi...
55 minutes ago