Tema Manhean U-Compound to be demolished 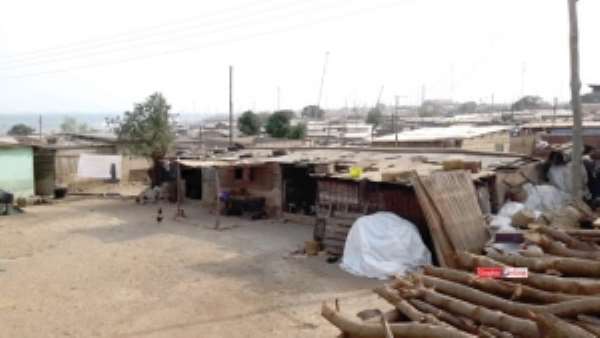 Five hundred houses and other structures at U-Compound, an area within Tema Manhean, have been marked for demolition by the Tema Traditional Council (TTC).

The structures are situated on about 200 acres said to have been given out temporarily on gratis to some fishmongers from the Volta Region to ply their trade but the TTC says it intends to build resorts on the land to generate income and has served notices to the residents that it will carry out the demolition on February 28, 2014.

About 5,000 people will be rendered homeless if the demolition is carried out. Cry of Residents

During a tour of the area on Saturday by the Daily Graphic, the Chairman of the U-Compound Residents Association, Mr Evans Horve Fiadu, said the community was allocated the land between the 1950s and 1960s by the TTC to facilitate their trade.

“It was an abandoned cemetery. We cleared the place, made it habitable and proceeded with our business activities. Although no documentation was provided on the transaction, we were made to pay annual rent on the land. We also provided some alcoholic drinks to the stool as tradition demanded in those days,” he said.

He said in the last quarter of last year, some notices were posted on the houses, asking residents to vacate the land.

According to Mr Fiadu, the residents appealed to the Tema Development Corporation (TDC), the Tema Municipal Assembly (TMA) and the police hierarchy in Tema to intervene but all pleas to those organisations did not receive any favourable responses.

In the early part of this year, he said, the TTC inscribed on each structure: “Last warning, remove by February 28, 2014.”

“Respectfully, we wish to state that as far as we know, when someone occupies land for a period of time, in the event of disposal of the land by the owner, the one occupying it has the first option of purchase. We want to humbly state that we have lived on the land for over half a decade. Moreover, we are not squatters, therefore, we want the government to intervene and save the numerous helpless citizens who will be rendered homeless if the eviction is carried out,” he said.

Mr Fiadu said instead of evicting the residents, the TTC should either sell the land to the residents, allow them to continue living there and pay rent or be relocated and paid compensation. TTC's angry response

In reaction, the Tema Mantse, Nii Adjei Krakue, said: “They will go.”

He told the Daily Graphic that the TTC had crafted a plan to establish some facilities which would generate income for the council.

Among the facilities, he said, was a seaside resort.

He added that the council needed the land badly to put up those structures.

The Shipi of the TTC, Nii Amarh Sompone II, said  200 acres of the Tema land was ceded to the fisher folk from the Volta Region to engage in the smoking of anchovies in the 1960s.

“We allowed them to ply their trade there for decades. They were not to build permanent structures on the land. Unfortunately, some of them have built houses and hotels and are renting them out without paying even a pesewa to the council. They have turned themselves into landlords.

“Government has acquired all our lands and this is what is left for us. We can't make any further sacrifices. Most of them are no longer engaged in fish smoking so they should go. We have done enough for them. We have initiated moves to put up resorts and other facilities to generate income to educate our children and offer scholarships to brilliant, needy people within the traditional area and we need our land to engage in those projects. They must go,” he said.

Nii Sompone said the U-Compound residents were under the false impression that the land belonged to the government.