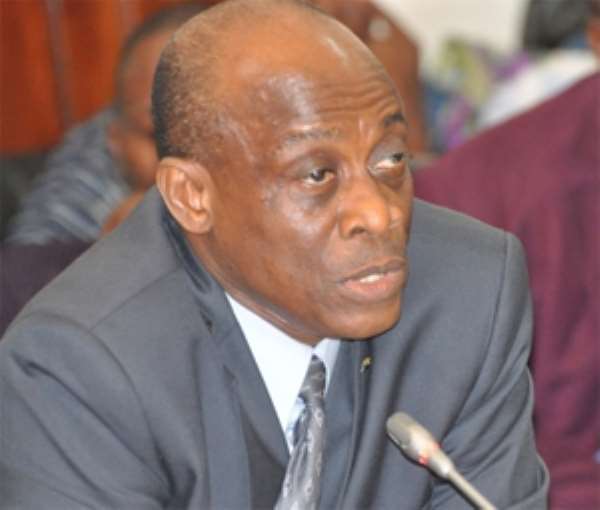 Seth Terkper
THE FIRST Deputy Speaker of Parliament, Ebo Barton Odro, was compelled to adjourn parliamentary proceedings yesterday when the Minority members walked out of the chamber and called for adjournment as there was no quorum; and described the Finance Minister as incompetent.

The move, which was secretly backed by some Majority members, was to protest against the Finance Minister, Seth Terkper, who was scheduled to meet the lawmakers yesterday to discuss some 'important matters affecting the work of Members of Parliament,' but failed to do so.

“This Finance Minister treats parliament with disdain and thinks that parliament is a department under the executive,” the Deputy Minority Leader, Dominic Nitiwul, told the DAILY GUIDE after the adjournment.

“We are an arm of government and must be treated with respect,” he added.

He said under the direction of the minister, the country is facing 'serious economic' challenges.

“Look, this Finance Minister is going to make the work of the President very difficult, if he is not removed from office,” he said, adding that he (Minister) had crippled the work of the MPs by deliberately refusing to release statutory funds for development purposes.

According to the Deputy Minority Leader, some statutory funds were in arrears of eight months – even though those monies had already been released to the finance ministry.

“This minister promised to meet us yesterday after President John Mahama himself had last Wednesday ordered the payment of these monies but the minister has refused again to meet us,” he said.

The New Patriotic Party (NPP) Member of Parliament for Atwima Mponua, Isaac Asiamah underscored, “The people of Ghana deserve a better finance minister and not this minister who has proved beyond every reasonable doubt that he cannot prudently manage the economy of the country.”

He noted that the current state of the cedi, the rising cost of living, arbitrary fuel price increases and the sharp increases in utility tariffs, were clear indication that Mr. Terkper could not deliver.

Meanwhile, preparations were still underway for the president to come and deliver his State of the Nation Address on Tuesday.

Business statement presented to Parliament yesterday indicated that the President would indeed be appearing before the legislators on Tuesday to deliver the address and that debate on it would begin on Thursday, February 27.