Australia eight wickets down at lunch in S. Africa Test 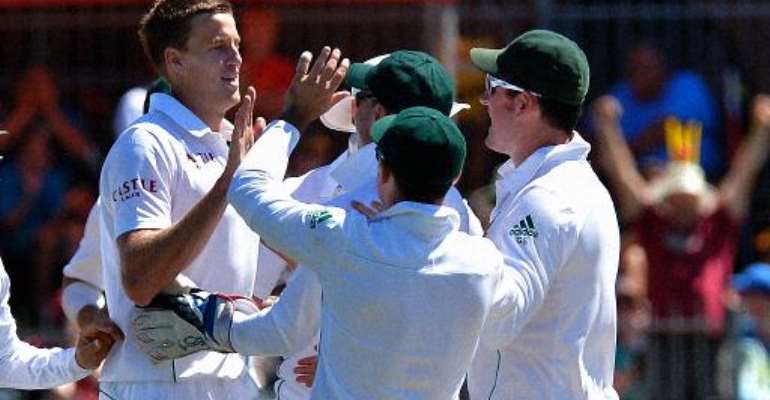 Australia were 205 for eight at lunch, still 218 runs behind South Africa's first innings total of 423.

Steve Smith and Brad Haddin both survived chances, while Hashim Amla and Wayne Parnell had to leave the field because of injuries.

Amla suffered a dislocated left ring finger when he got his fingers to a high slash by Haddin, on one, at gully off Vernon Philander. Haddin made only nine before he had his middle stump uprooted by a fast, straight ball from Dale Steyn.

Smith gave a more straightforward chance to Robin Peterson, substituting for Amla, when he clipped Steyn to square leg with his score on 24. Smith was on 49 not out at lunch.

Having picked just four specialist bowlers, South Africa suffered a blow when Wayne Parnell pulled up with a groin injury midway through his ninth over.

David Warner added just five runs to his overnight 65 before he edged a drive against Philander to Graeme Smith at slip. Nightwatchman Nathan Lyon withstood a battering from fast bowler Morne Morkel before chopping a short ball onto his stumps after making 15 off 43 balls.

Steve Smith and Haddin added 40 before Haddin was bowled. And Mitchell Johnson hit a quick 27 before he was bowled in the last over before lunch by off-spinner JP Duminy. In the previous over Johnson had been struck a heavy blow on the batting helmet by a bouncer from Morkel.