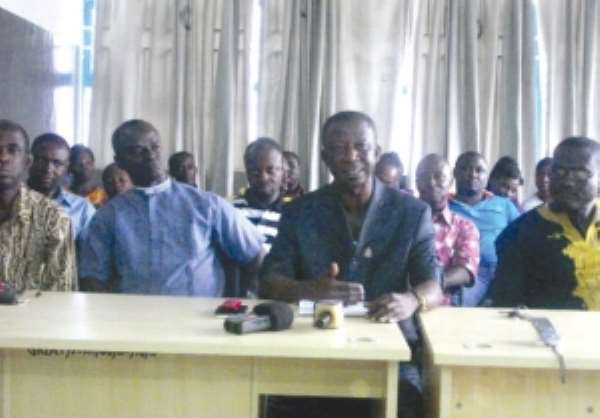 The Ghana National Association of Teachers (GNAT) has advised the Ministry of Education (MoE) and the Ghana Education Service (GES) to ensure that the teacher rationalisation exercise is not implemented in a manner to demotivate teachers or undermine their welfare.

Speaking at a press conference in Kumasi, the National President of GNAT, Mr Paul Agyei Boakye, said while GNAT was not against the exercise aimed at ensuring equitable distribution of teachers in the country, it was necessary that “All affected teachers are fully paid their T&T and transfer grants as stated in the Conditions of Service.”  GNAT's response to the exercise

He indicated that although the GNAT was in support of the rationalisation exercise, the association would not sit down unconcerned to allow the GES and the MoE to violate the rights of teachers and their collective agreement, stressing that teachers who would be affected by the exercise would only go when all their grants were paid in full.

The Minister for Education, Prof. Naana Jane Opoku-Agyeman, was reported in the February 18 edition of Daily Graphic http://www.graphic.com.gh/news/education/17791-more-teachers-to-be-transferred-to-improve-teaching-in-deprived-districts.html to have said that the Ministry of Education and the Ghana Education Service had embarked on a teacher-rationalisation exercise to address the issue of inequitable distribution of teachers which she said was a major problem militating against the delivery of quality education in the country.

She explained that a recent research by the ministry indicated that there were more teachers than required in the urban and peri-urban centres, while less privileged districts and rural schools had inadequate teacher supply.

As per the GES Collective Agreement “A transfer grant of two months gross salary shall be paid to each teacher on approved transfer,” adding that an employee shall be paid a transfer grant at the appropriate rate where the transfer is at the instance of management, provided it is not on disciplinary grounds.

Mr Boakye said the GNAT admitted that transfers were the prerogative of the employer as stipulated in Act 651, section 8 (a) and also upheld by the GES Collective Agreement with teacher unions, section 2 (1). He, however, cautioned the MoE and the GES to handle the exercise with care to avoid demoralising the teachers and, thereby, defeating the motive for the exercise.

Mr Boakye said GNAT believed that the GES had the capacity to avert the looming threat by respecting relevant laws regarding transfer/posting in the education sector, saying; already in the Ashanti region, transfer letters signed by the district directorate state categorically that T&T is to be borne by the teacher.

He cautioned that the rationalisation exercise should not be left in the hands of some heads of second-cycle schools and district directors who would use it as an avenue to settle personal scores with teachers who might not be in their good books.