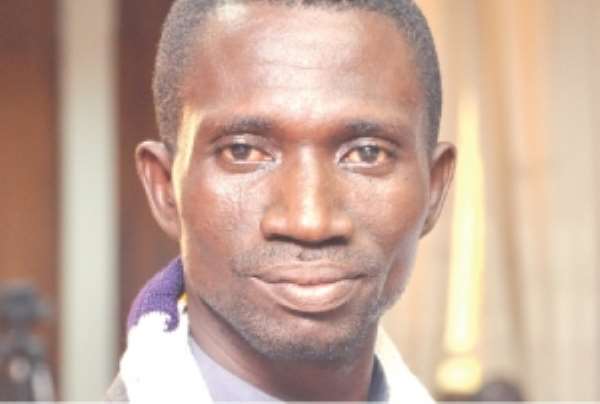 A Circuit Court in Accra on Thursday ordered the arrest of Prophet Daniel Nkansah, the flag bearer of the New Vision Party (NVP) for failing to appear before it.

Prophet Nkansah, who is said to be at large and his son Daniel Boahene Nkansah Junior are being held on the charges of conspiracy to commit crime and five counts of robbery.

The son, who appeared before the court has pleaded not guilty to the charges at the court presided over by Mr Francis Obiri.

Daniel Boahene Nkansah Junior, a student has been remanded into police custody to reappear on March 4, despite a bail application put in by Mr C.K Hoeyi, their counsel.

Prophet Nkansah, his son and ten others are said to have robbed five workers of XY Canis Majoris Company Limited and took away a sunny video camera, mobile phones, computers, check books, certificates, a  driver's license and thousands of cedis.

The Prosecution told the court that a look at the CCTV camera showed that the action taken by the accused person were nasty.

According to prosecution, the police was conducting further investigations into the matter and asked that they be remanded to assist in that direction.

The case before the court was that the complainants were Stephen Ped Andam, Geshon Essel,  Billy Apeku Ken,  Isaac Tetteh Korgbey and Emmanuel  Nana Kwaku Badu.

According to Prosecution Mr Andam is the Chief Executive officer of XY Majoris Company Limited located at Atico near Kaneshie.

Prosecution said the company was now using three out of four stores with his son Nkansah Junior occupying one of them.

On February 1, this year, Mr Andam and his workers approached Nkansah Junior as agreed with Prophet Nkansah to vacate the store to enable his workers move in.

The prosecutor said after the meeting, a brawl ensued but Mr Andam and his workers resumed work in their offices.

Nkansah Junior informed his father about  the brawl. Prophet Nkansah therefore went to the company's premises with a group of about 10 on board his (Prophet Nkansah's) pick up vehicle, armed with cutlasses and other implements, they attacked Mr Andam and five other workers.

In the process, prosecution said the accused persons and the group of men made away with Mr Andam's mobile phone, a computer with its charger, cheque books,  an international driver's license, one IPad and cash of GH 55,000 cedis.

According to the prosecutor, they also took from Mr Korgbey, a computer and a Sony video camera and robbed Mr Emmanuel Nana Kweku Badu of his wallet containing GH 1,000 cedis with identity cards.

The matter was reported to the Police and Nkansah Junior was arrest on February 4. During investigations, a sonny video camera was retrieved from Nkansah Junior.

Prosecution said efforts were being made to arrest Prophet Nkansah.