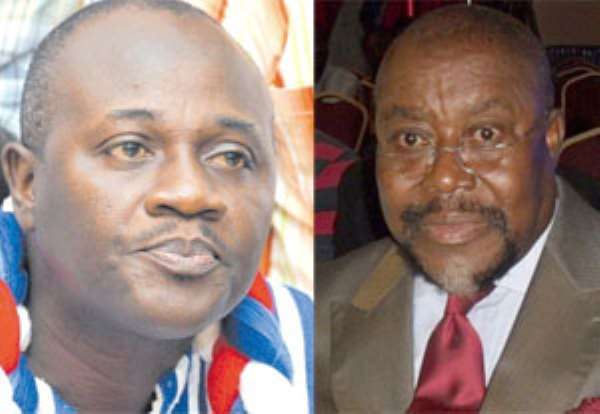 He said recent utterances in the media by Dr Nyaho-Tamakloe were not only in gross violation of the party's code but also embarrassing to the party.

'For you (Nyaho-Tamakloe) to be singing the song of our opponents, better join them; it means you don't wish us well,' Mr. Botwe added.

Mr Botwe who was reacting to Nyaho-Tamakloe's concerns about the composition of the party's National Vetting Committee stated emphatically that 'politics is not just about numbers but positive numbers.'

Dr Nyaho-Tamakloe said the composition of the vetting committee was lopsided and had no fair ethnic representation.

He contended that the vast Akan representation on the committee 'reinforces the huge perception in the public domain that the party is Akan-dominated.'

But Mr Botwe on Asempa FM's 'Ekosii Sen' programme on Wednesday said Dr. Nyaho-Tamakloe's claim was “baseless and an insult” to the party.

According to him, the current members on the vetting committee led by Chairman of the National Council of Elders, C.K Tedam, cut across all ethnic groups.

The Okere MP who is also a former General Secretary of the NPP said Dr. Nyaho-Tamakloe should have sought clarification about the composition of the committee before making his concerns public.

Mr Botwe described as sad how a leading member like Dr. Nyaho-Tamakloe would also be fuelling the propaganda of 'our political opponents.”

'You deliberately whip up the propaganda of our opponents; say it to incite people against the party. It's sad,' he bemoaned.

Mr. Botwe said 'opportunism and hypocrisy' were not virtues in politics and should therefore not be encouraged in the NPP.

He added, however, that the NPP would continue to remain strong in the face of the vile ethnic propaganda against it.