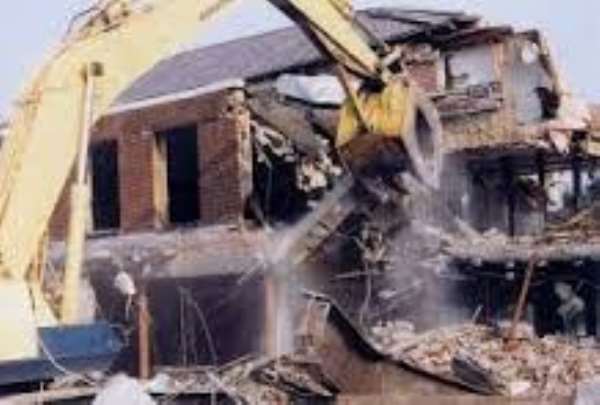 The Tema Development Corporation (TDC) is contesting the number of structures it pulled down in its recent demolition exercise at Adjei Kojo, near Ashaiman, insisting that a 10 acre land could not have accommodated 500 houses, which is alleged to have been pulled down during the exercise.

'It is not possible to have 500 structures within that area', argued the Managing Director of the TDC, Mr. Joe Abbey.

According to the corporation, it only pulled down 65 structures, a figure it said was contrary to the 500 reported in the media, and attributed it to the Member of Parliament (MP) for the area (Tema West), Irene Naa Toshie Addo.

The TDC made this observation yesterday when it appeared by the Parliamentary select committee on Works & Housing to answer questions on what necessitated their action in pulling down the structures at the above mentioned area and why it failed to give it a human face.

The Committee on Works & Housing, chaired by Hon. David Tetteh Assumeng, had met on the issue, as part of their investigations into the circumstances leading to the demolition exercise and to find out whether such an exercise was legitimate.

Mr. Abbey, commenting further said their action was legitimate since it was carried out within the confines of the Public Land Protective Act, Act 240.

He told the Committee that several written notices to the residents at the demolished area went unheeded, thereby compelling the TDC to embark on such move to protect their property.

'Mr. Chairman, before embarking on the demolition   exercise, we served the residents notices that whoever has acquired a land from the TDC should come and show us documentary proof for us to act accordingly, but as at today, no one has showed up,' noted Mr. Abbey.

He said since the Corporation's acquisition of the said land in 1952 to construct 25 self-acquired communities, it had always sublet it for farming purposes, until people started encroaching on it in 1999, resulting in legal battle between the perpetrators and the TDC.

Mr. Abbey opined that in 2003, the TDC had the court's ruling in their favour, but just as they were about to develop the land, the aggrieved encroachers entered into stay of execution, and abruptly brought their plans to a temporary halt, until when judgment was passed in their favour in 2008.

He said since then, all efforts to get the squatters out of the said piece of land have proved futile, leaving them with no option than to demolish the structures to protect their property and the GH¢25 million investment they have made in the area.

The Committee, having analyzed the documents and oral explanation given by the TDC was spellbound and expressed their heartfelt condolence to the delegation for the trauma they've gone through, as a result of the enormous bashing they've received from the public.

Daniel Titus-Glover, MP for Tema East, commenting on the matter, said the TDC was right to have demolished the illegal structures at Adjei Kojo and wondered why the Corporation failed to take punitive action against the perpetrators as required by the law.

He accused the media of not being fair to the TDC in their reportage on the Adjei Kojo demolishing exercise.

'By the documents they have provided, somebody should be bold enough and say what is wrong is wrong,' he averred.

Hon. David Assumeng is sharp comment directed the TDC to furnish the Committee with other supporting documents latest by Monday, February 24, 2014, to enable them interrogate the matter properly.

He said the committee would visit the site of the demolition exercise to ascertain the facts of the demolished structures by itself as soon as it was given the green light by the State security operatives.

Chiefs and Queen mothers of Nadowli-Kaleo congratulate Alban...
36 minutes ago