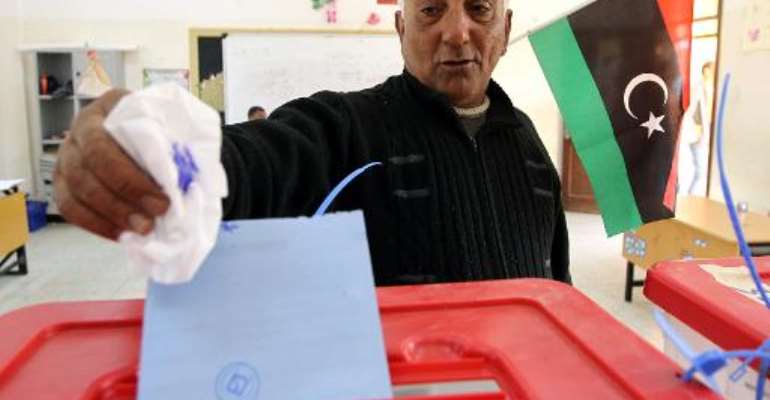 A Libyan man casts his vote to elect a constituent assembly at a polling station in the eastern city of Benghazi on February 20, 2014. By Abdullah Doma (AFP)

Tripoli (AFP) - Libyans went to the polls Thursday to elect a panel to draft a new constitution in the latest milestone in the chaotic political transition following the overthrow of Moamer Kadhafi.

There was none of the enthusiasm that marked Libya's first free election in July 2012 as public frustration mounts over the weak central government's failure to restore order in the wake of the Arab Spring uprising.

Ali Hassan, a polling station officer at the Fatma al-Zahra school in the capital insisted: "It's still early and it's a holiday (for the vote). People are having a lie-in."

Houda Bouzid, a woman in her 30s, said: "I've come to vote for a candidate to push for women's rights in the new constitution."

Just 1.1 million of 3.4 million eligible voters bothered to register compared to more than 2.7 million 19 months ago -- and that only after several extensions to the deadline.

A threat by powerful former rebel militias to dissolve the interim General National Congress (GNC) elected in the 2012 poll had meanwhile ramped up pressure on the weak central government ahead of the vote.

"All of us are aware that in a transition, a second election may not motivate people and mobilise energies in the same way the first elections did," he said.

"But we call on Libyans not to underestimate the importance of these elections.”

They stayed closed and arrangements were being made for voters to use other polling stations.

Derna is a hotbed of extremist groups which have carried out repeated attacks on judges and security forces.

In the capital, a journalist from the privately owned Al-Assema television, known for its anti-Islamist editorial stance, was seriously wounded in a bomb attack on a staff house, a manager at the channel told AFP.

In the more than two years since Kadhafi was captured and killed, former rebel brigades armed with heavy weapons looted from his arsenals have carved out fiefdoms across the sprawling country.

The persistent lawlessness was highlighted by the brief abduction of Prime Minister Ali Zeidan by former rebel militia in the capital last October.

The new charter is to cover key issues such as Libya's system of government, the status of ethnic minorities and the role of Islamic sharia law.

But Libya plans to go ahead with elections to a new transitional authority rather than wait for the constitution to be finalised.

Following street protests over its decision to extend its mandate until the end of the year, the GNC agreed on Sunday to organise early elections for a replacement body.

In principle, all of the 692 hopefuls in Thursday's poll were standing as individuals, as political parties were barred from fielding candidates.

The candidates include 73 women, and the assembly will have at least six seats reserved for women.

Another six seats are reserved for members of Libya's three main ethnic minority groups -- the Berbers, Toubous and Tuareg.

But the two Berber seats will remain vacant as the main Berber organisations called a boycott to protest the failure of the interim authorities to guarantee the community -- which played a major role in the 2011 uprising -- a bigger say in drawing up the new charter.

Election commission head Nuri al-Abbar said voting material could not be delivered to 29 polling stations in the southern town of Murzuq because of a protest movement by the local Toubou community.