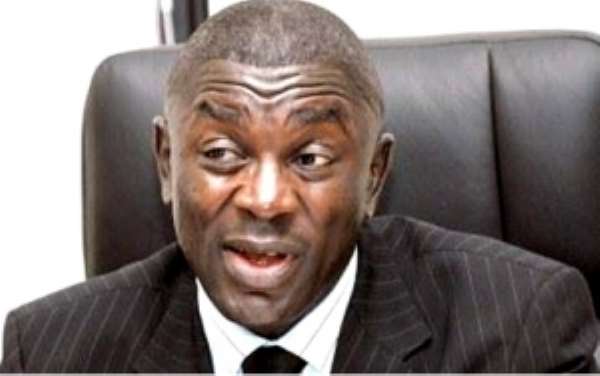 The Financial Division of the High Court on Wednesday acquitted and discharged the Chief Executive Officer (CEO) of UT Bank and one of his branch managers of contempt charges.

Capt Prince Kofi Amoabeng (rtd) and the Manager of the Airport Branch of the UT Bank, Mr Enrique Okomate, were dragged to the court by Kayode Alade, who had prayed the court to imprison them for failing to adhere to a December 20, 2013 court order which directed at the bank to pay $391,250 to him.

But the attention of the court, which was billed to deliver its contempt ruling Wednesday February 19, was drawn to the fact that the bank had, indeed, paid the money into the coffers of the Judicial Service.

At the court's sitting, it also emerged that the bank had filed documents to prove it had, indeed, paid the money into the court's coffers. UT Bank apologises to court

A supplementary affidavit in opposition to the committal of contempt which was deposed to by Mr Okomate explained the circumstances leading to the bank's inability to initially pay the said amount.

It indicated that it was not the intention of the bank to flout any of the court's orders and further proceeded to unreservedly apologise for the bank's inaction.

Capt Amoabeng and Mr Okomate walked out as free men, in the company of their legal team, after the court, presided over by Mr Justice John Ajet-Nasam, had acquitted them of any wrongdoing.

Although the money had been paid, the court did not order its release because an interested party, Auxesia Energy, from whose account the money was paid, is laying claim to it.

The company has since filed a motion on notice to stay the execution of the court's December 20, 2013 order on the grounds that Auxesia Energy had no contract or dealing with Alade.

Auxesia Energy's motion will be moved on Monday, February 24, 2014.

The lawyer for the applicant, Mr Charles Tetteh, on February 4, 2014, moved the motion for contempt, while counsel for the respondents, Mr Archer, explained to the court that the account of Auxesia Energy was in debit.

An affidavit in support of the applicant's motion for contempt said EOCO froze the account of Auxesia Energy and secured a confirmation order to that effect from the court.

“Before the orders of the court suspending payment and freezing of the said account, the interested party which I represent as its designated person ashore (DPA) had rendered services to Auxesia Energy and issued with a cheque for payment," it said.

According to the applicant, his company could not access the account because it had been frozen and for that reason it applied to the court for a review of the freezing order and the subsequent payment of the money owed by Auxesia Energy.

Following the applicant's request for a review of the court's order, the court reviewed its orders and directed the UT Bank to pay $391,250 to the applicant's company with immediate effect.

“That the order was served on the bank the same day but the UT Bank, Airport branch, and its managing director have failed, refused and or neglected to pay the said amount as ordered i>y the honourable court,” the affidavit in support said.

A reminder notice, according to the applicant, was served on the bank but the applicant did not receive the desired response.

That posturing, according to the applicant, amounted to “blatant disrespect of the court and the sanctity of the judicial system”.

In the latest twist to events, Auxesia Energy has denied the claims of the applicant.

According to the energy company, it rather had transactions with Earth Petroleum, which in turn had business dealings with the applicant's company.

The court will, on February 24,2014, delve into the issues to reach a resolution.