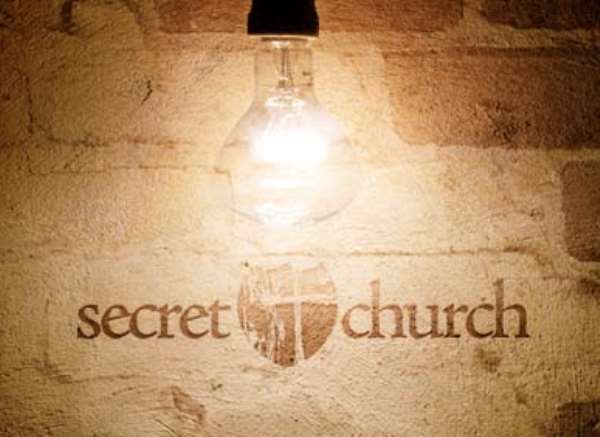 A religious group called Spoken Word has been camping several families in a bush at Oyibi for the past three years.

The group, led by one Daniel Navel, believes the second coming of Christ has passed so they have been selected to live forever in that camp.

Adom News Reporter Maabena Duho Mensah visited the camp under cover because the campers are under strict instructions not to interact with the outside world except the police, social workers, and sometimes family.

She reported that the camp is located behind Kas Estates at Oyibi, and the campers include several children and pregnant women, adding that the youngest child is seven years old.

“They sleep on the floor in tents made out of white polythene bags, and they have no potable water, electricity, TV, radio and telephones. They have no communications with the outside world,” she said.

Maabena said she counted about eight rubber tents all hidden in bushes and hardly visible to outsiders.

Several of them, according to her, were university graduates and professionals, but they had all quit their jobs and now live on meager income from mushroom and charcoal they produce and sell at the nearby Madina Market.

They also get water supply from the outside world, as Maabena saw a non-camper pushing a wheel barrow full of gallons of water to the camp to supply them with water.

Camp leader, Daniel Navel told Maabena Duho Mensah they are not breaking any laws because each member came to the camp willingly and they were under no duress to stay in camp.

“We are not ignorant people - we have graduates here in the camp. We just choose to live here in isolation - our children are here with us and they are schooling,” Navel said.

He also said some Oyibi Police Officers and staff from the Social Welfare Department had been to the camp to interrogate him and other campers and convinced themselves that they were not breaking any laws.

Meanwhile, one of the campers, Kwame Kpogoh, who is in the camp with his graduate wife and three children, have gotten his extended family worried particularly about his children.

His younger brother, Divine Kpogoh told Adom News Kwame used to be a teacher and house master at Ghanata Colleges at Dodowa, but he and his family went missing for two years before the family found him in camp having quit his teaching job and taken his children out of school.

“We found him in the camp and told him about our father's death but he told us he did not know us and he never came to participates in the funeral rites of our late father even though he is our senior-most brother,” he said.

Divine Kpogoh said Kwame had since cut all communication with family and all efforts to get him or the children out has proven futile.

He blames Pastor Navel for the preventing outsiders from seeing their family members in the camp, because “anytime we go there he [Navel] tells us we can't see him.”

Even though Navel claims the kids in camp get education, Divine Kpogoh wondered how they could provide the children with any proper education in the bush.

Divine Kpogoh said they have reported the matter to DOVVSU and also petitioned the Ministry of Gender and Children's Affair, but to no avail.