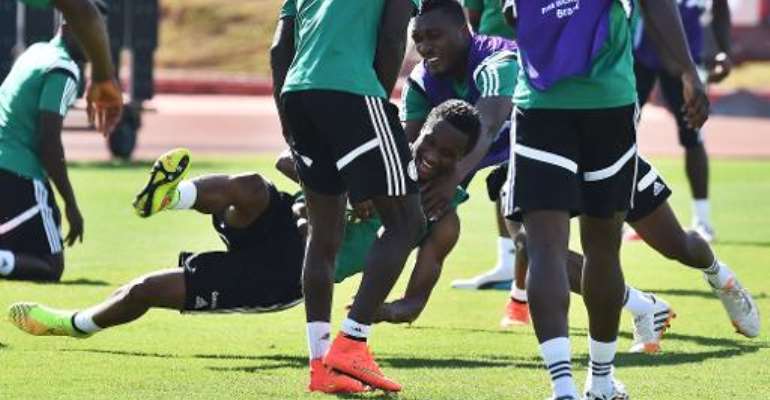 Nigeria's midfielder John Obi Mikel (C) collides with a teammate as they play a game of handball during a training session in Brasilia on June 29, 2014, a day before their match against France at the FIFA World Cup in Brazil. By Jewel Samad (AFP)

Africa has never had two teams in the last 16 and if both can pull off upset wins, they will meet in the quarter finals and an African nation will be guaranteed a first ever place in the semi-finals.

French coach Didier Deschamps and Germany's Joachim Loew know however that if they win, their sides will clash in the quarter finals.

France take on Nigeria in Brasilia at 1600 GMT while Germany play Algeria, with the North Africans also playing for revenge, in Porto Alegre at 2000 GMT.

Deschamps insists that he is concentrating on getting Karim Benzema, and the rest of the potent force that scored eight goals in Group E, ready to face the African champions.

Several players were rested for the Ecuador group game, when France were held to a 0-0 draw.

So Mathieu Valbuena should return and Laurent Koscielny could line up in central defence alongside Raphael Varane as Mamadou Sakho is doubtful due to a thigh injury.

Yohan Cabaye will return after missing the Ecuador game due to suspension, but Paul Pogba's place is under threat from Moussa Sissoko.

Nigeria coach Stephen Keshi insists that his side's dispute over bonuses is history now that their cash has been paid, and they are now concentrating on reaching the quarter-finals for the first time.

CSKA Moscow winger Ahmed Musa, who scored twice in the 3-2 defeat by Argentina, said: "We need to defend well, take our chances up front and learn from the Argentina game."

Germany have played Algeria twice -- at the World Cup in 1982 and in a 1964 friendly -- and lost both games, but it is Vahid Halilhodzic's Algeria who have revenge on their mind.

The Desert Foxes have "not forgotten" 1982; when West Germany lost 2-1 to Algeria and then played out a 1-0 win over Austria that ensured the European neighbours qualified for the second round. The game has gone down in football history as "The Shame of Gijon", after the Spanish city where it was played.

"We are a little bit optimistic," said the Udinese midfielder cautiously. "Germany are the best team here, we need the perfect game and it would be a sensation if we can reach the quarter-finals."

Loew rejects talk of revenge as barely anyone in the German squad was even born when the shame game was played. His side, minus Lukas Podolski who has a thigh injury, will start as favourites but he has also warned them against complacency.

"Anyone who thinks that an easy opponent is waiting for us in the next round is making an enormous mistake," said Loew after Germany finished as Group G winners.

Team captain Philipp Lahm has also said Germany must prove on the field that they are worthy of the reputation of being Europe's best hope at the World Cup.

"We have had great teams in the past and this squad has great potential, but we have to take it a round at a time and play aggressively," he said.

"I think we are the better team, but we have to prove that on the pitch."

The winners of the two games will meet in the quarter final in Rio de Janeiro on Friday.

Chiefs and Queen mothers of Nadowli-Kaleo congratulate Alban...
31 minutes ago