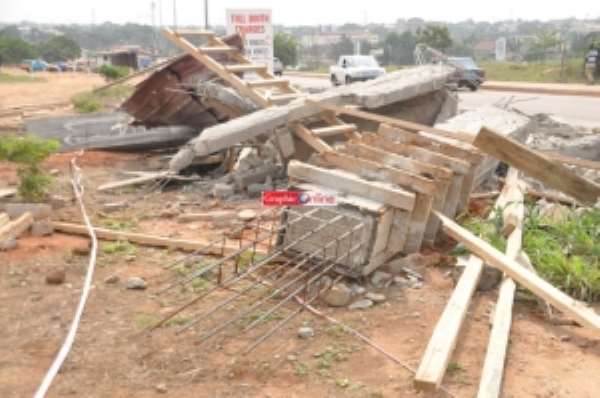 The controversy surrounding the collection of tolls by the University of Ghana, Legon deepened when operatives of the National Security pulled down a toll booth under construction at the Okponglo end of the university campus at dawn Tuesday.

The action did not, however, stop the university authorities, which had no prior knowledge of the demolition exercise, from collecting the tolls.

Toll collectors, stationed about 150 metres away from the former toll booth, were seen busily handing tickets, in exchange for cedi notes or coins, to motorists.

Those who had stickers were exempted from paying. Controversy

The decision by the university to collect tolls on its roads has generated controversy. While the university is bent on collecting the tolls, some members of the public are against the action.

The Parliamentary Select Committee on Roads and Transport has affirmed its support for the initiative, stating that the university acted within the law in its imposition of tolls for the use of its roads.

But the Chief of Staff, Mr Prosper Bani, has asked the university to rescind its decision to impose tolls on motorists who used the campus roads. University reaction

Officials of the university were said to be in a meeting when the Daily Graphic got to the campus.

“We vow to resist and confront anybody and any attempt to trample upon our rights as law-abiding citizens with all the vim and blood in us and other tools legitimately available to us,” he said.

He indicated that “actions of this nature only remind people of the harrowing days of military dictatorship and occasions fear and panic among the innocent civilian populace who are desperately working hard to keep body and soul together”.

Mr Bimi described the action as unfortunate, considering the fact that Ghana is a democratic country governed by democratic principles and ideals, not by brute force and the use of arms.

“The UG-UTAG takes very strong exception to this action and considers it an affront to or attack on the university,” he stated. National Security confirms demolition

Meanwhile, the National Security Council (NSC) has explained that the demolition exercise carried out early yesterday on the University of Ghana campus was not targeted at stopping the collection of tolls by the university.

The National Security Coordinator, Lt Col Larry Gbevlo-Lartey (retd), told the Daily Graphic that the “exercise was carried out for the larger interest of the public”.

He said following public outcry over the inconvenience caused by the siting of the toll booth, he alerted the Security Chief of the UG through a letter to the need to discontinue the project and relocate it forward to allow free flow of traffic on the main Accra-Madina Road.

He said upon several reminders which fell on deaf ears, he decided to visit the site last Sunday, only to witness unprecedented traffic on that road, although it was a Sunday.

According to Lt Col Gbevlo-Lartey, the situation had compelled him to hold an emergency meeting with security chiefs and a decision was taken to remove “that nuisance” to enable the public to go about their duties without let or hindrance.

He said the exercise was without prejudice to the matter before Parliament or at the Supreme Court.

“I am happy that the university is still collecting the tolls, in spite of the exercise to remove the barrier causing hardship to people who have no business with the university,” he said.

Asked whether his outfit had informed the university, the security capo responded in the negative, saying, “Security issues are best solved by the security.”

He pledged National Security's commitment to cooperate with all institutions, for that matter the University of Ghana, to protect lives and property. Background

The collection of the tolls is, therefore, being done to enable the authorities to pay back the loan and also help in the maintenance of the new roads. User charges implemented amidst controversy

On February 1, the university followed up on its announcement to implement a road toll scheme amid controversy.

By the arrangement, all vehicles entering the main campus and those using the road passing through the Staff Village have to pay a user charge.

Currently, private vehicles pay GH¢1 per entry, while the authorities, after a meeting with the Achimota-Legon Taxi Co-operative Transport Society Limited and the Ghana Private Road Transport Union, Achimota Main Branch, agreed that members of the two unions should pay GH¢5 per vehicle per day.

Taxi drivers who are not members of the two groups, however, pay GH¢2 per entry, while large trucks delivering goods or passing through the university campus pay GH¢3 per entry.

Section 16 (2) states: “The conferment of particular powers on the University Council by other provisions of this act shall not be taken to limit the generality of this section.”

Section 23 (1) (a) states that the university shall have power for any purpose which the council considers necessary or expedient, or (b) for the purpose of the performance of the functions of the university, to acquire and hold movable or immovable property, sell, lease, mortgage or otherwise alienate or dispose of that property and to enter into any other transaction.

“As we speak now, there is no official communication from the government directing the university to stop the tolling, Mr Bimi said. “All what we know is what we heard from the media. We do not take anything from the media.” Way forward