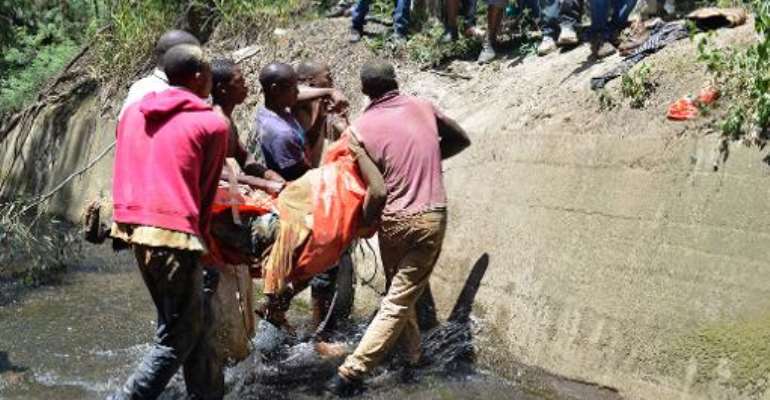 The body of an illegal miner is carried after being pulled out of an illegal gold mine in Benoni, outside Johannesburg, on February 18, 2014. By Mujahid Safodien (AFP)

Johannesburg (AFP) - South Africa's elite police unit vowed to hunt down illegal mining kingpins Tuesday, as two bodies were discovered at an abandoned gold mine where dozens of people had been trapped.

Shadrack Sibiya of the police's Hawks unit said illegal mining "cannot be allowed to continue" as the rescue mission entered its third day.

A total of 25 illegal miners have emerged from the disused pit east of Johannesburg, risking arrest, a large fine and a possible jail sentence.

"One body was brought to the surface by the miners, we have been unable to get to the second body," said Roggers Mamaila, part of the emergency team trying to coax remaining miners out of the shaft.

It was not immediately clear how or when the victims had died.

Sibiya said 22 miners were due to appear in court on Tuesday and had given the police information that could crack the gangs they work for.

"We are convinced that information obtained will lead us to the kingpins," he said.

"We will be going after the masterminds. We cannot allow this to continue.

Police said the arrested men were all aged between 20 and 40, were all foreign nationals, and most did not have immigration papers.

Emergency responders were still looking for around five more men believed to be hiding underground and fearing arrest.

"That figure is based on the tip-off we received on Sunday... that there were 30 people underground," said Mamaila.

"There is still movement underground, so we expect the last group of people to surrender themselves."

Much of the area around Johannesburg is pockmarked with old shafts, a testament to the city's century old history of gold mining.

While many are no longer commercially viable, they still contain enough deposits to attract scores of the city's unemployed, and those from much farther afield.

Many shafts include elaborate networks of runners, who bring in food, drinks and other essentials for miners, who police believe spend up to two weeks underground.

Accidents are commonplace. In 2009, 82 illegal diggers died in a disused gold mine shaft when a fire broke out underground.

The most recent rescue effort was launched on Sunday, after cries for help were heard on a dusty patch of grassland in Benoni, east of Johannesburg.

The men became trapped when large rocks fell, or were pushed, to block the entrance to the shaft.

Mine owners Gold One International Limited said on Monday they will reseal the open shaft on March 3.