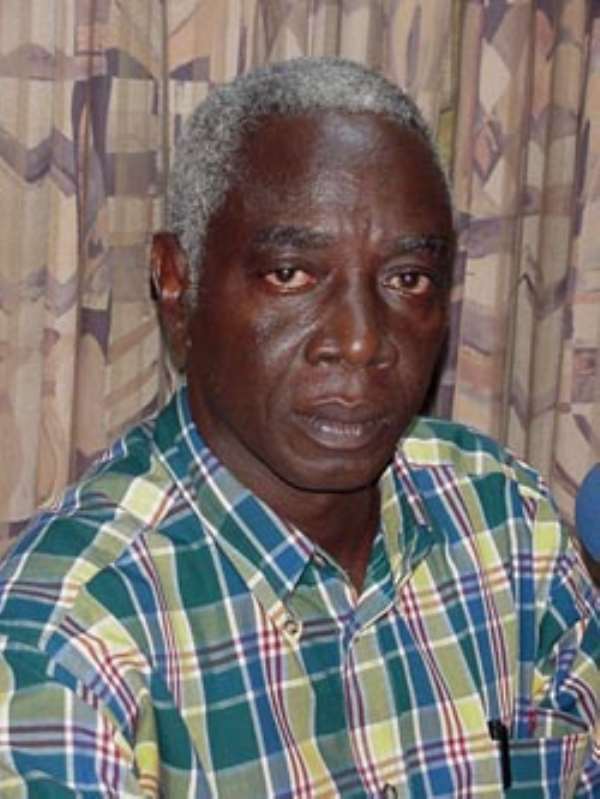 The two-week nationwide voters' registration exercise ended at 6 p.m. yesterday.The Electoral Commission (EC) said it was satisfied with the process, in spite of the initial problems, and would, therefore, not extend the exercise.

In an interview, the Chairman of the EC, Dr Kwadwo Afari-Gyan, said just as the commission promised, it was able to ensure that materials went to areas where there were shortages to ensure that everything went on well. Faced with public outcry against the hiccups such as lack of registration materials and the strike action by some registration officials, the EC last week said it would not hesitate to extend the registration exercise if it became obvious that many eligible voters would be disenfranchised.

The EC, in a statement issued yesterday, apparently rejecting calls for the extension, said, "The registration of voters currently taking place will officially end at all registration centres throughout the country at 6 p.m. today, March 29, 2004”.

The statement, signed by its Chairman, Dr Kwadwo Afari-Gyan, said "registration officers are, however, to note that every qualified person in the queue by 6.00 p.m. should be registered before the station closes". It added that "registration of qualified Ghanaians on admission at hospitals and clinics who have not already registered will continue until Thursday, April 1, 2004”.

Last Thursday, the Inter-Party Advisory Committee (IPAC) met in Accra, during which representatives of the political parties raised a number of issues with regard to the registration exercise.

The EC, in its response, said it had taken note of their concerns and was doing all in its power to rectify them. Among the concerns raised by the political parties at the IPAC meeting were shortage of registration forms at some centres, particularly in Accra, the non-availability of indelible ink, poor quality photo materials, late start of the exercise at some centres, unnecessary interference with the process by some party officials and agents, interference with persons presenting themselves for registration and illegal possession of registration materials.

During the last registration exercise, the traditional area recorded a total of 9,400 potential voters. A member of the Electoral Commission (EC), responsible for the Brong Ahafo Region, Nana Amba Eyiaba disclosed this to the Graphic yesterday after visiting Badu on Sunday as part of her four-day working visit to the region to monitor the ongoing registration exercise.

In a related development, opinion of the political parties is divergent about the decision of the Electoral Commission (EC) not to extend the registration, reports Donald Ato Dapatem.While three of the parties; Convention People's Party (CPP), Peoples National Convention (PNC) and New Patriotic Party (NPP) have welcomed the decision adding that it means the EC rectified the hiccups associated with the exercise, the National Democratic Congress (NDC) said by the decision most of their members will be disenfranchised.

Speaking in an interview, the General Secretary of the PNC, Mr Gabriel Pwamang, said at an Inter Party Advisory Committee (IPAC) meeting some of the parties raised concern about reported cases of shortages of registration forms and indelible ink, and refusal of some registration offers to be at post.

He said an agreement was reached that the EC should take steps to address them.He added that although the party was contacting its various agents throughout the country, it could say that the exercise was quite successful. Prof Nii Noi Dowuona, General Secretary of CPP, said if the EC had come out clear to state that it was not extending the exercise it presupposed that the EC had rectified the anomalies that initially characterised the exercise.

On his part, the Public Relations Officer of NPP, Mr Kwadwo Afari, said in a developing country like ours, there was no way the exercise could be 100 per cent perfect.However, the General Secretary of NDC, Dr Josiah Aryeh, was of the view that the EC, by not extending the time, would disenfranchise most supporters of the party.

According to him, at the time, of going to press, some places considered to be strongholds of the NDC lacked registration materials adding, even some of the places, registration officials delayed in reporting. Residents in Tema who could not register during the early days of the registration exercise which started two weeks ago, trickled in to the various registration centres on the last day of the exercise to get registered, reports Kate Hudson, Tema.

A visit to some registration centres in the municipality yesterday showed very low turn-out by residents with no queues at the registration centres.Officials described the exercise generally as smooth and peaceful, while problems with materials were solved as they arose and there were no problems particularly, except two incidents which threatened the peace.

Meanwhile, the Member of Parliament for Tema West, Mr Abraham Ossei Aidoo, has said that in fairness, the registration exercise should be extended. He noted that the exercise was scheduled to last for two weeks, but due to some reasons, not all the days were utilised by the centres, and it was only fair that it was extended by a day or two, saying “ this will not cause any harm”.

In another development, violence nearly erupted at the Mehame Methodist Primary School registration centre on Sunday when an NPP party agent attempted to prevent the former NDC MP for the Asutifi South Constituency, Alhaji Collins Dauda from registering at the centre.

After Alhaji Dauda had registered and was waiting for his registration slip him, when the party agent, Alexander Kwadwo Kontor, challenged his nationality and obstructed the process.Briefing newsmen at Mehame, Mr Kingsley Oti Aboagye, the Registration Officer said Alhaji Dauda came to the centre around 11.15 a.m. in the company of Mr Mohammed Kwaku Doku, the Brong Ahafo Regional NDC Secretary and Mr Essah Mensah, the Asunafo North Constituency Chairman of the NDC to register.

He said after he had led Alhaji Dauda to go through the registration process, he gave the form to the NDC party agent, Abdulai Mohammed who was assisting him in the absence of the Registration Assistant to detach the receipt for Alhaji Dauda.

According to Mr Oti Aboagye, just before the receipt could be detached, Kontor also known as Koo, the NPP party agent who had gone out of the registration centre, emerged from nowhere and started shouting at the top of his voice that he would not allow the slip to be detached for Alhaji Dauda.

Mr Oti Aboagye said when Kontor claimed that he was challenging Alhaji Dauda because he was not a Ghanaian, he (Oti Aboagye) told him that it was not the procedure for the registration of an applicant.He said Kontor defied the normal procedure and finally held the registration form instead and in the process, part of the form was destroyed. Mr Oti Aboagye stated that the case would be sent to the appropriate quarters for redress.