The Guardian Poll On The Return Of The Parthenon Marbles 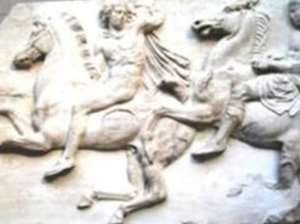 The result of The Guardian poll on the return of the Parthenon Marbles would have come as no surprise to those who have followed the discussions on the issue and, specifically, recent polls. The overwhelming majority of the British people have in the past expressed their view that these Greek sculptures should be returned to Athens. What surprised me though was that the percentage of those in favour of returning was not above 90%. Could the recent floods in Britain have something to do with the results, a lot of people being more concerned with what may be considered as more serious matters? This is clearly not the most auspicious time to discuss the Parthenon Marbles with the British.

Why the British Government and the British Museum do not respect the wishes of the British people is a question I cannot presume to answer. However, it seems the British ruling class and the Government are holding on to the Parthenon Marbles and artefacts such as the Benin Bronzes as symbols of power and are not yet ready to hand back these objects to their owners who have been claiming their return over a long time?

The argument usually presented by the British ruling class and their supporters is that if they hand over the Parthenon Marbles they will soon be faced with requests for the return of the Benin Bronzes and other artefacts in the British Museum; they do not want to open the flood gates. But this is one of those useless arguments which surprisingly seem to appeal to many. What the British authorities are saying in effect is that they have many artefacts of dubious acquisition in their museums and once they agree to return one object they may have to return all.

The British answer of general refusal to consider requests for restitution has the tendency to amalgamate all claims and to confuse the individual cases and their specific histories. The British authorities themselves have often said each individual case should be considered separately but when an individual request is made it is refused with a general objection.

But the real weakness of the argument based on the flood gates principle is that it is bereft of any law or morality. What the authorities are saying basically is as follows: We have stolen, looted or acquired under dubious circumstances, many artefacts from many countries and if we return one all the other aggrieved owners from Asia and Africa would put in claims. Could any one requested to return property present such an argument before a court or any respectable body?

A British academic, Jonathan Harris has written in his book The New Art History - A critical Introduction (Routledge, 2001, p.275) :

'The question of the meaning of the 'Benin bronzes' or 'Elgin Marbles' in London - 1900 or 2000 - is inseparable from the issue of British attitudes towards Africa and the Orient as sites, once for direct military and political colonisation, and now for their post-imperial economic exploitation and indirect manipulation. To return them would imply the belief, on the part of the British authorities, that the peoples of those parts of the world were now capable of competently looking after artefacts that were removed ostensibly on the grounds that the local inhabitants were unfit, because of the 'degeneration' of their societies, to act as their curators. Their return would also imply admission of their illegal possession by the British. Both implications remain largely unthinkable because post-imperial racism continues to be a highly significant aspect of British foreign policy. Though British society may be relatively 'multicultural now, its ruling elite, like that of the US, is still predominantly white, middle-class and male.'

Two Riders At The End Of The West Frieze Parthenon Marbles, Greece, Now In The British Museum, London