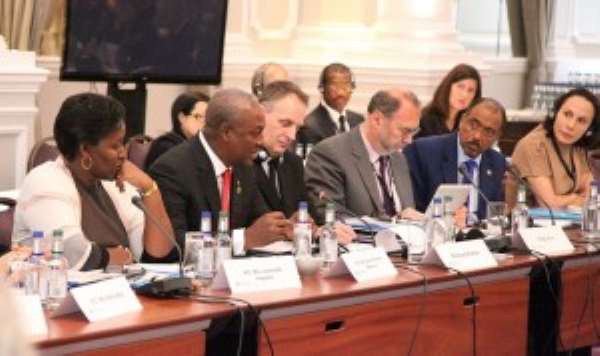 
President John Dramani Mahama has made a strong case for African nations (and the developing world) to be supported in the local manufacture of Anti-Retroviral Drugs (ARV) to ensure a more affordable treatment of people living with AIDS.

Speaking during a high-level meeting of the UNAIDS and Lancet Commission in London on Thursday, the President stated that instead of the costly importation of these much-needed drugs, African nations can, and must be supported, to produce these drugs much more cheaply at home.

He added that many more lives would be saved through this proposal and the fight against HIV and AIDS could be won much more quickly.

In his well-received argument for the local production of ARVs, President Mahama, who is one of three heads of state serving as Commissioners on this international body, said the difficulty in accessing drugs is one of the major challenges confronting HIV patients.

He described the situation as a serious negative reflection of a lopsided structure in the production of ARV drugs globally.

President Mahama challenged UNAIDS, the Global Fund to fight AIDS, Tuberculosis and Malaria and other partners in the international community to provide tangible assistance for building the capacities of local pharmaceutical companies in African countries to take up the challenge.

He warned that failure to adopt and support such a scheme could reverse the gains already made in the global fight against HIV and AIDS, especially in affected poor nations.

President Mahama noted that despite Ghana's remarkable success over the years in the fight against HIV and AIDS, these gains could be negatively affected if affordability and accessibility continue to be challenges for people living with AIDS, especially where survival depended unfortunately on where an affected person lives.

He was emphatic about his Government's commitment and determination to ensure the consolidation of the gains made so far in defeating AIDS.

The Ghanaian leader and other Commissioners of the UNAIDS-Lancet Commission are holding a two-day high-level meeting aimed at identifying and deploying effective ways to end the AIDS epidemic and thereby advance key objectives in global health.