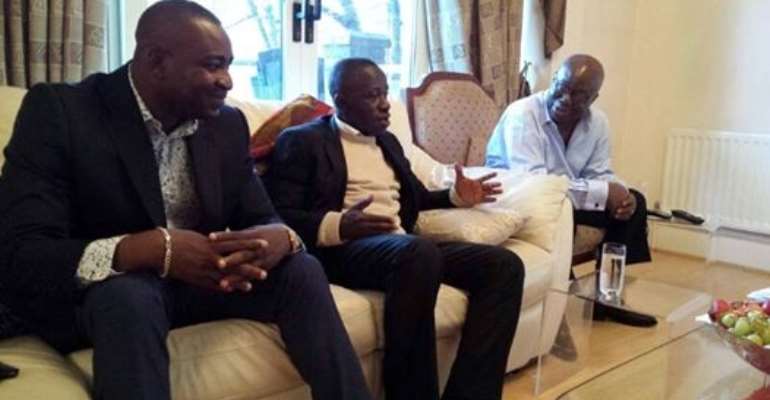 The newly-elected Ashanti Regional Chairman of the New Patriotic Party (NPP), Bernard Antwi-Boasiako and the man he beat in the regional election, Kwame Osei Prempeh, have both met with the 2012 flagbearer of the party.

Mr Antwi-Boasiako, also known as 'Chairman Wontumi'  and Osei Prempeh were in London Saturday at the invitation of Nana Addo Dankwa Akufo-Addo.

The two party gurus were invited to Nana Addo's hotel apartment to discuss the future of the party and how the two could work together for victory in 2016.

The meeting is seen as an attempt to smoothen any cracks that may have developed as a result of a bitter contest held last month to elect party executives party in the Ashanti region - the NPP's stronghold.

Osei Prempeh contesting for Chairmanship, had accused the eventual winner of vote-buying after he donated a three-storey building for the regional administration of the party

Since then, Chairman Wontumi, a small-scale miner has visited Mr Osei Prempeh in his house to solicit support in the overall interest of the NPP.

The twice defeated Presidential aspirant, Nana Akufo-Addo is keen to protect the interest of the party as he mulls over a historic third shot at the Presidency in 2016

The NPP leader is presently cooling off in the UK after a fierce 2012 political campaign and a protracted legal battle, which challenged the results of the 2012 Presidential election.

He is expected to be in the country next month.