Ghana not in crisis — Prez Mahama 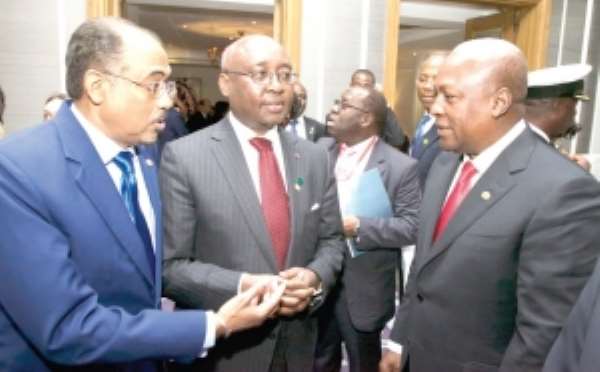 President John Dramani Mahama has stated that Ghana is not in economic crisis to call for panic in the country and international circles.

He indicated that the challenges facing the economy were short-lived and that the government was competent enough to handle them.

In an interview with the French news agency AFP in London yesterday, President Mahama stated that the measures put in place to restore normalcy in the economy were workable and would soon show dividends.

The President, who had been in London since February 11 to participate in the high-level meeting of the UNAIDS and Lancet Commission, said the cedi, which had plummeted in value against the major international currencies, and rising inflation would be controlled soon.
Confidence in Ghana still high

President Mahama was happy that the confidence the international community had in the country was still very high and promised that every effort would be made to protect the enviable image the nation had carved for itself in economic growth.

He said consistently Ghana had posted significant economic growth above seven per cent, adding, "This means that the economy is expanding."

He noted that the economic difficulties were not peculiar to Ghana and expressed delight that Ghana's mid-term prospects had been recognised worldwide.

Investment opportunities
President Mahama said there was very high interest and appetite for investment in Ghana.

"At the recent World Economic Forum in Davos, I held dozens of bilateral meetings with investors who have heard the good news about Ghana and are very eager to come to invest there.

"Some of them have since come to take a look at the country and the signs are good for us," he said.

Ghana, he said, had advantage in terms of a stable democracy, peace and security, the rule of law and human rights, adding, "I think these are some of the things investors are looking for."

Oil revenue
Asked how the revenue from crude oil was being managed, the President said Ghana had one of the best transparent systems of oil management one could find in any part of the world.

"We will not misuse oil revenue, so that we don't go the bad ways of other countries that have found oil," he said.

Health issues
President Mahama said the government took great interest in the health of the people and had consistently come up with initiatives to provide quality health care throughout the country.

He mentioned the Community-based Health Planning and Services Compounds (CHPS) that were spreading in villages, including the remotest parts of the country, and said 1,600 of them would be constructed within the next 10 years.

On the UNAIDS and Lancet meeting, the President, who is a commissioner of the group, said it had been very successful.

He said a five-year strategic plan to advance Ghana's response to HIV/AIDS was progressing and that in spite of some few challenges, the target of achieving zero new infections and eliminating mother-to-child infections would be realised.