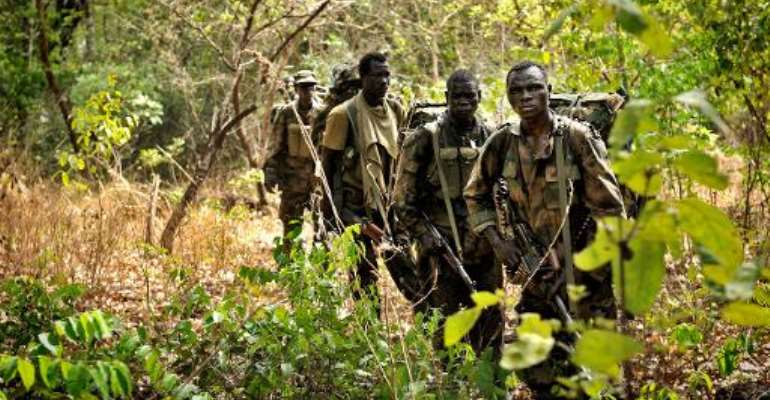 Odhiambo was indicted by the Hague-based International Criminal Court (ICC) in 2005 along with LRA chief Joseph Kony and fellow rebel Dominic Ongwen on charges of butchering and kidnapping civilians.

"There are pointers from defectors that Okot Odhiambo may be dead," Defence Minister Crispus Kiyonga told AFP Friday. "Our forces are verifying these reports to check if indeed he died in the battles we have had with them and a position will be communicated."

"It will not be a surprise that he could be dead because the UPDF (Ugandan army) has in the past killed many top LRA commanders and he cannot be an exception," he added.

"The LRA's strength has diminished and the remaining force, including Kony, are on the run."

In recent years the group, a militant outfit whose doctrine mixes African mysticism with Christian extremism -- has been forced out of Uganda and Odhiambo had been thought to be hiding out with a hardcore of fighters in the remote jungles of Central African Republic, northeast Democratic Republic of Congo or South Sudan.

Ugandan army spokesman Paddy Ankunda also told AFP the intelligence reports had come from rebel defectors, who said the rebel commander may have died in a Ugandan army assault "at the end of last year", but gave no details on where the clash took place.

"We are trying to verify the report, but there is a very high possibility that he is dead," Ankunda said.

According to the ICC warrant, former LRA members describe Odiambo as a "ruthless killer" and "the one who killed the most".

Odhiambo is widely suspected to have directed the killing of some 300 civilians during a February 2004 attack on the Barlonyo internally displaced persons camp in northern Uganda, one of the single largest massacres in the LRA's brutal history.

After Odhiambo reportedly ordered the rebels to "kill every living thing", witnesses say camp residents were burnt alive in their homes, hacked to death with machetes, stabbed, bludgeoned and shot as they tried to escape.

A US embassy spokesman in Uganda, Daniel Travis, told the Daily Monitor newspaper that Washington -- which has a unit of US special forces helping in the hunt for LRA leaders -- was in the process of "verifying similar reports".

An AFP reporter who met Odhiambo in 2005 described a slender and unsmiling man, dressed in neatly ironed military fatigues and the rebel's standard issue rubber boots, always flanked by heavily armed teenage soldiers and who would hold the gaze of those around without blinking.

Described as having "greying" hair by Interpol, Odhiambo ascended to the number-two position in the LRA in October of 2007, after Kony is thought to have ordered the killing of his previous deputy, ICC fugitive Vincent Otti.

Odhiambo is suspected to have played a central role in Otti's murder, and as Kony's loyal right-hand man serves as a vital go-between for different commanders spread out in the jungle.