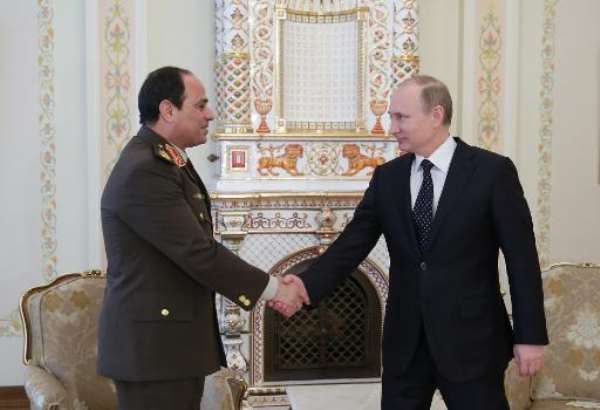 Cairo (AFP) - Egyptian army chief Abdel Fattah al-Sisi appeared to further set the stage this week for a presidential bid when he travelled to Russia, where President Vladimir Putin endorsed him as leader-in-waiting.

It was Sisi's first trip abroad since he overthrew Islamist president Mohamed Morsi in July, setting off months of deadly unrest.

The visit was aimed at improving relations between the once-close allies, after Cairo and Washington fell out over Morsi's overthrow.

But as Sisi sat down with Putin at his residence outside Moscow, some suggested the visit was a carefully choreographed publicity stunt, with Sisi looking the part of an international statesman alongside the Russian strongman.

The field marshal, who is officially defence minister and deputy premier in the government that replaced ousted Islamist Mohamed Morsi, travelled to Moscow ostensibly in response to a November visit by Russia's defence and foreign ministers.

From the moment he boarded the plane to Moscow dressed in a blazer, local media cast him as a president-in-waiting boldly moving Egypt away from dependence on the oft-reviled United States.

In Moscow, that perception was reinforced by Putin, who publicly congratulated Sisi on his yet undeclared decision to run for office.

The 59-year-old Sisi is overwhelmingly expected to run in elections this spring.

Putin said: "I know that you, mister defence minister, have decided to run for president of Egypt. I wish you luck both from myself personally and from the Russian people."

Russian and Egyptian media were awash with reports of a multi-billion dollar arms deal funded by Gulf Arab states, to replace aid suspended by Washington following Morsi's ouster and a deadly crackdown on the Islamist's followers.

Issandr El Amrani, North Africa project director at International Crisis Group, said the visit might have been intended as much for show as substance.

It was part of a "carefully orchestrated process by which he would declare his candidacy," El Amrani said.

"There was the publication of pictures in which Sisi is seen for the first time in civilian attire, and he gets to stand next to a world leader like Putin," he said.

The military, which has meticulously cultivated the enigmatic field marshal's image, splashed the pictures on its Facebook page.

State television showed images of Sisi appearing to nod off on the plane with a satisfied look on his face.

Supported unquestioningly by much of the domestic media, Sisi was certain to generate positive headlines during his visit, accompanied by Foreign Minister Nabil Fahmy.

The headlines appeared to play well with Egyptians who back Sisi because they want a strong leader to stabilise the country, in turmoil ever since the 2011 uprising that overthrew Hosni Mubarak, another military officer turned president.

-Wall against the US-

"Putin said he would invest in Egypt," said Sameh, a man who works in the badly hit tourism industry.

Sisi, pictured during the visit in a winter coat adorned with a large red star, was also cast as a man who could stand up to the United States.

Sisi "created a wall against the United States," said Sameh.

The United States is poised to resume its role as the Egyptian military's main benefactor by unfreezing its aid, and has brushed aside worries that it could be replaced by Russia.

"Of course we don't endorse a candidate and don't think it's, quite frankly, up to the United States or to Mr Putin to decide who should govern Egypt," she said.