Don’t Blame Me For The Free Fall Of Cedi – President 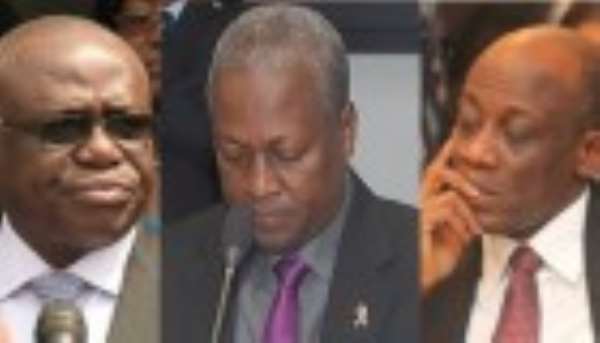 If you were looking for the cause of the incessant fall of the Ghanaian Cedi against the major trading foreign currencies in recent times, don't look at the decisions of the Mahama administration.

According to President John Dramani , the continuous depreciation of the national currency is as a result of the troubles of the global financial   system, of which Ghana is not in isolation.

“Regarding the depreciation of the Ghana Cedi, I want you all to know two major things. First: this is not caused by our national decisions. We are part of the global financial system and so we share both its ups and downs.”

The President took to social media platform on facebook to tell suffering Ghanaians that they are not alone in the quagmire of economic crises they find themselves in, by mentioning some other countries that are equally facing challenging times with their national currencies.

“Since the beginning of this year, several countries with stronger economies than ours, have seen their currencies depreciating due to the moves of international players on the stock market. In January, for instance, Argentina's peso fell more than 20%, Tu rkish lira lost 6%, the South African rand fell 7% and so did the Russian ruble,” he enumerated

The president has, however, assured Ghanaians that the difficulties they face are short term and has asked Ghanaians to bear with the government, even as it puts in measures to remedy the situation.

“The second thing I want you to be sure of is that the government is aware of the effect this depreciation has on your lives. We take all the proper measures to enable the Cedi to regain its strength against the US dollar and other major currencies.

'This is a short term challenge and we will fix it. Panic only worsens things in the financial market, so bear with the government, confident and fearless, because we will chart the path for recovery,” he noted

His comments has, however, been greeted with mixed reactions and comments on various social media platforms.

While others hold the opinion that the government cannot absolve   itself of decisions taken over the past few years, which has greatly contributed to the current economic situation, others think   the president's thoughts on the subject only goes to ridicule the country in the eyes of the international world.

Mr. Franklin Cudjoe, Executive Director of policy think-tank, IMANI Ghana, who made a comment on the president's statement on the falling Cedi was convinced that the President was being greatly mislead.

“Mr. President, you are being fed with a lot of untruths and international market watchers are laughing at us. Time to overhaul the kitchen, please”

He disagreed with the president's submission to the effect that the current depreciation of the Cedi was a ripple effect of the global economic system.

'NO , just one single action of your government led to 70% of the problems w ith the cedi – wage bill which was unscientifically engineered to appease those who didn't need it in the first place.

'Sorry, Sir, but the simple issue here is that your advisors organised our collective funeral when we had just reached our prime and now we are burying and mourning the coming deaths in our economy,” he noted

“It appears that the deterioration in the value of the GH¢ against the US$ is not just a recent happening. It has been one long journey of a deep slide. As you can see, other countries in the Africa Region (Nigeria, Kenya, Rwanda, & Ivory Coast) have a long trend of positive performance against the US$.

Your Excellency, I am, therefore, a little puzzled about the statement that the depreciation is not the result of national decisions”, noted another social medai commentator.

The Mahama government has recently come under a barrage of criticism from very top members of his government for failing to improve the lives of the ordinary ghanaian.

An ambassador designate to the Netherlands, Dr. Tony Aidoo, in his recent comment on the health of the economy blamed the government for failing Ghanaians.

“You have no excuse to fail! …Don't tell me that you came to power without realising the huge responsibilities that you are going to incur when you are voted into power. However onerous the responsibility of governance, it must be done and you have to do it in a way and manner that balances resources and your outgoings,” he noted.

But the president has a way of responding to his critics. One of his recent posts on his facebook wall read:

“I thank and salute the wise Ghanaian politicians who understand that the right attitude in such times is to assist the government and stop predicting disasters. Because in a democratic country such as ours the government is the peoples g overnment. It is your government. And it does everything necessary to lead our country and to attain the development goals it has announced. A nation has to be united when facing any kind of political or economic challenges.”