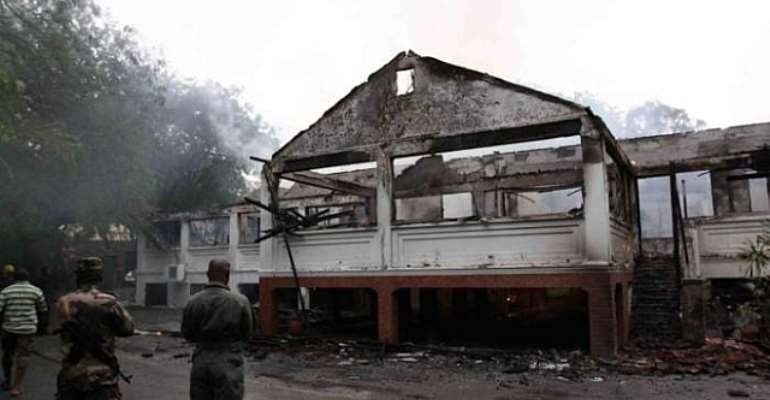 A personal pain for ex-president Jerry John Rawlings four years ago this same day was when his Ridge residence was razed down by fire.

"It's a pity that it has taken so long even under Mills' regime. It took almost about two years to start work. We are still at [refurbishing] it. I mean we have got the curtains in. Let's hope the government can bring in the necessary furniture"

Valentine's Day marked on the 14th February, is a day many people around the world show appreciation for the people they love or adore.

But on a day like this, fire destroyed the home of former Ghanaian president Jerry Rawlings in Accra early Sunday morning in 2010. His wife and daughter were in the cream-coloured residence when the blaze broke out at dawn, but escaped unhurt. The ex-president was not in Accra.

The president has had to chase down government to rebuild and refurbish it.

On a Valentine Day like this, the former president Jerry John Rawlings wants Ghanaians to rein in the passions and not to "lose touch with realities on the ground" because "there is a lot of pain and suffering on the ground".

His idea of celebrating the day is to show some love to an orphanage his office has identified.

Speaking to Joy News' Elton John Brobbey, the former president said "my wife and I, I  hope would find the time to make a modest presentation to an orphanage that has been identified in Teshie-Nungua. That's the love and appreciation we would like to show"