Pistorius speaks out one year after shooting girlfriend dead 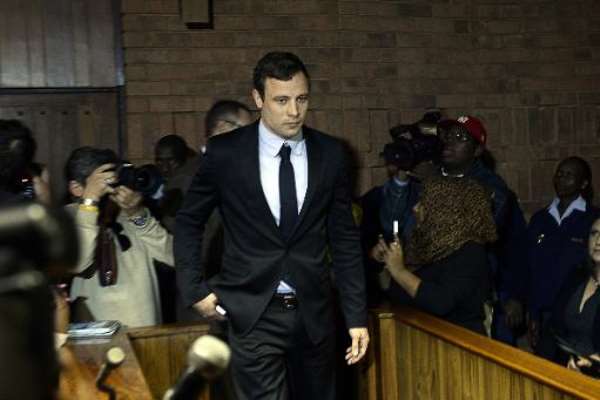 Johannesburg (AFP) - South African Paralympic sprint star Oscar Pistorius said Friday he was consumed with "sorrow" as he marked one year since he shot dead his model girlfriend on Valentine's Day in what he maintains was an accident.

The world-famous double amputee, 27, shot Reeva Steenkamp through his toilet door, claiming he mistook her for an intruder at his upmarket Pretoria home.

However the track legend known as "Blade Runner" goes on trial for premeditated murder on March 3.

"No words can adequately capture my feelings about the devastating accident that has caused such heartache for everyone who truly loved -- and continues to love Reeva," Pistorius wrote on his personal website.

"The pain and sadness -– especially for Reeva's parents, family and friends consumes me with sorrow.

"The loss of Reeva and the complete trauma of that day, I will carry with me for the rest of my life," he said in the message signed simply "Oscar".

He also posted a link to the message on Twitter, describing it as "A few words from my heart". It was the first time he has used his official account on the social networking site since February 12, 2013, two days before the shooting.

The Valentine's Day horror sent shockwaves around the world, polarising crime-weary South Africa around whether one of its national heroes was guilty of murder, or a heartbreaking accident.

Steenkamp, a blonde cover girl and law graduate, was shot in the head, elbow and hip through the locked bathroom door of Pistorius's home.

The athlete, who earned his nickname for the fibreglass prostheses he uses in competition, was born without calf bones and had both legs amputated below the knee when he was 11 months old.

He catapulted to fame at the 2012 London Olympics as the first double-amputee to compete against able-bodied athletes.

But details of his reckless past and love of fast cars, beautiful women and guns emerged in the media after he shot Steenkamp.

One newspaper dubbed him the "Blade Gunner".

Pistorius will also answer charges for discharging a firearm on two separate occasions before Steenkamp's death.

The case has halted his participation in athletic events and ended lucrative endorsement deals with US sportswear giant Nike and French cosmetic firm Clarins.