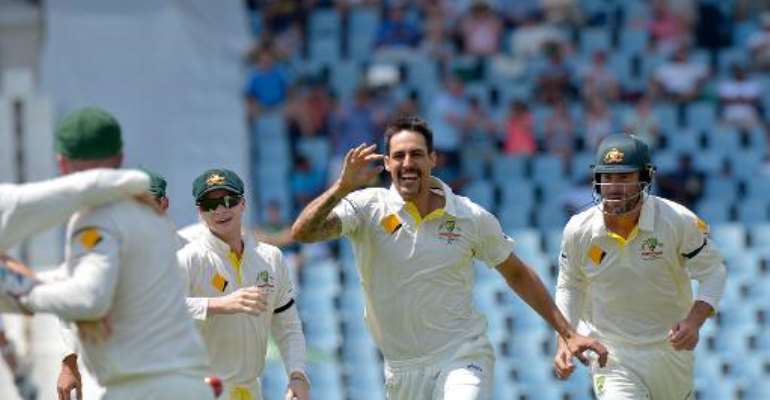 Mitchell Johnson (C) celebrates after bowling out South Africa's Graeme Smith in the first test match between South Africa and Australia at SuperSport Park in Centurion on February 13, 2014. By Alexander Joe (AFP)

South Africa were 63 for four at tea after dismissing Australia for 397 in the first innings.

Johnson needed just four balls to strike a major blow for his team when he dismissed South African captain Graeme Smith with a vicious bouncer.

He followed up with the wickets of Alviro Petersen and Faf du Plessis in his third and fourth overs.

Smith started confidently, pulling Ryan Harris's first ball for four and taking ten runs off the first over of the innings.

Petersen scored a single off Johnson's second ball, bringing Smith on strike against the left-arm fast bowler, who destroyed England by taking 37 wickets at an average of 13.97 during the recent Ashes series.

Johnson's first ball to Smith was short and there was a half-hearted appeal as it thudded off Smith's thigh pad to short leg.

The next ball was a fast bouncer which climbed towards Smith's head. The batsman lifted his bat in front of his face and the ball looped over the slips, with Shaun Marsh running back from third slip to take a fine catch.

Petersen made only two before flashing at Johnson to be caught by wicketkeeper Brad Haddin and Du Plessis followed soon afterwards, fending another short delivery to Michael Clarke at second slip.

Marsh and Steve Smith took their fifth wicket stand to 233, seeing off the threat of Dale Steyn and Vernon Philander with the second new ball, before Smith was out for 100, caught at second slip off Ryan McLaren.

Smith took 33 balls to advance from his overnight 91 to his fourth Test century, made off 211 deliveries, but was out two balls later.

Brad Haddin, one of the stars of Australia's 5-0 series win over England, lasted just three balls before he swung across the line against left-arm spinner Robin Peterson and was leg before wicket without scoring.

Marsh took his overnight score of 122 to a Test-best 148 before Philander came back into the attack and had him caught at first slip.

Dale Steyn and Robin Peterson wrapped up the innings soon after lunch, with Steyn bowling Ryan Harris and Peter Siddle to finish with four for 78, while Peterson bowled Johnson for a hard-hit 33.