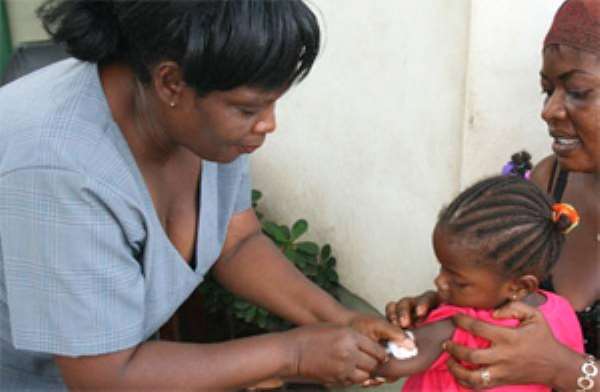 A child being immunized against measles

During this time period, an estimated 13.8 million deaths have been prevented by measles vaccination, and surveillance data showed that reported cases declined 77 percent from 853 480 to 226 722.

The report which was made available to the Ghana News Agency on Thursday by FadÃ©la Chaib, WHO Communications Officer, noted that the gains were as a result of global routine measles immunization coverage holding steady at 84 percent and 145 countries having introduced a routine second dose of measles vaccine to ensure immunity and prevent outbreaks.

It said in addition to routine immunization, countries vaccinated 145 million children during mass campaigns against measles in 2012 and reached more than one billion since 2000, with the support of the Measles and Rubella Initiative.

It noted that despite the impressive gains made, progress towards measles elimination remained uneven with some populations still unprotected.

It said measles continues to be a global threat, with five of six WHO regions still experiencing large outbreaks and with the region of the Americas responding to many importations of measles cases.

The report said the African, Eastern Mediterranean and European regions are not likely to meet their measles elimination targets on time.

It said the region of the Americas had achieved measles elimination and continues to maintain this status while the Western Pacific region was approaching its target.

The report also said routine measles vaccination coverage is an important progress indicator towards meeting Millennium Development Goal 4 because of its potential to reduce child mortality and widely recognized as a marker of access to children's health services.

It said without improved immunization coverage both through routine services and mass campaigns, outbreaks would continue to occur, hampering efforts to meet global elimination targets and prevent additional deaths.

It said the ability to contain outbreaks by improving routine coverage and, when necessary, implementing high quality vaccination campaigns required countries to place a high priority on elimination goals and to invest heavily in health systems improvements.

The Measles and Rubella Initiative which was first launched in 2001,  is a global partnership led by the American Red Cross, United Nations Foundation, United States Centres for Disease Control and Prevention, United Nations International Children Fund and WHO.

The Measles and Rubella Initiative is committed to ensuring that no child dies from measles or is born with congenital rubella syndrome; reducing measles deaths by 95 percent by 2015; and achieving measles and rubella elimination in at least five regions by 2020.