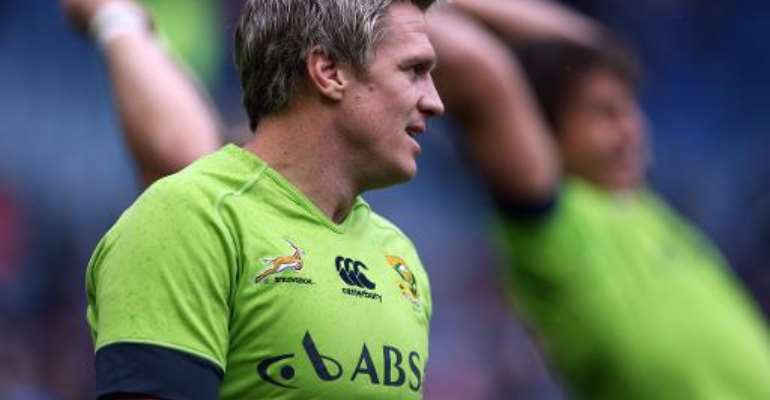 Jean De Villiers of South Africa warms up before the start of the international rugby union test match between Scotland and South Africa at Murrayfield Stadium in Edinburgh, Scotland, on November 17, 2013. By Ian MacNicol (AFP)

The veteran 32-year-old centre became the sixth star to win the award more than once, following in the footsteps of Naas Botha, Schalk Burger, Bryan Habana, Fourie du Preez and Uli Schmidt.

De Villiers led South Africa to 10 victories in 12 Tests last year with both losses coming against the New Zealand All Blacks, who are ranked No.1 in the world.

The Western Stormers stalwart also collected the Try of the Year award for his effort against Wales in Cardiff during an end-of-season tour.

Willie le Roux, who played at full-back and right-wing for the Springboks, was rewarded for an excellent first Test season with the Players' Player of the Year trophy.

Hooker Adriaan Strauss, a Central Cheetahs team-mate of Le Roux, got the nod in the South African Super 15 Player of the Year contest.

And another wearer of a No.2 shirt -- Scarra Ntubeni of Western Province -- was named Currie Cup Player of the Year.

Coach of the Year: Jimmy Stonehouse

Referee of the Year: Jonathan Kaplan