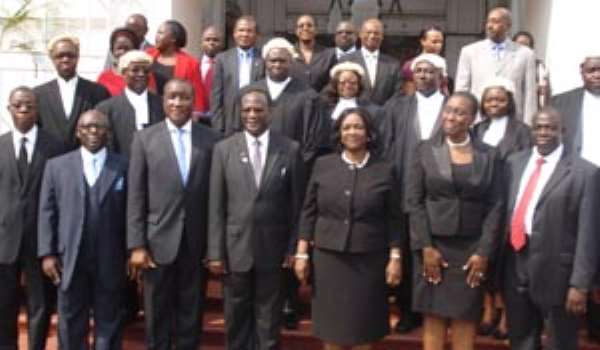 The newly sworn-in judges in a photograph with the dignitaries at the event.

Chief Justice Georgina Theodora Wood, Chief Justice of the Republic of Ghana, has charged judges to be self-accountable and transparent in the discharge of their duties in enforcing and protecting the legal rights of litigants.

She said judicial transparency and accountability demand that the judiciary should be the first to subject themselves to the Constitution and laws of Ghana and be ready to give a good account of their stewardship at all times.

'Even though it is important that we do all that lies in our power to safeguard our independence which is guaranteed under that Constitution, it is equally important that we do cultivate a culture of individual and corporate judicial accountability and transparency,' she said.

Chief Justice Theodora Wood made these statements at the swearing-in of seven Circuit Court Judges; three of whom were promoted from the magistrate court judges and four from the bar.

The new judges, sworn-in after taking the oath of allegiance, and secrecy and the judicial oath were His Worships Michael Abbey, Bernard Bentil and Baptist K. Filson.

The Chief Justice in her address said the judiciary must be accountable to the sovereign people of Ghana on whose behalf they exercised judicial power.

She said the judiciary was working to ensure public trust and confidence in the judicial system, thus, the new judges should bear in mind that they are in the public eye and stand in danger of being sanctioned if their conduct should fall below the standards.

'I will entreat you not to engage in conduct that can impugn your personal integrity or this key governance institution. You have a sacred duty to enhance the authority of the courts and not diminish or undermine it,' she said.

Chief Justice Steven Kavuma, Chief Justice of Uganda, who was the guest for the event urged the new judges to have the interest of their people in mind as they go about their duties.

He said although the role of justice could be challenging, the sovereignty of the judiciary depended on the performance of the judges, therefore, they should be on top of their job by reading, understanding, memorizing and following the code of conduct of the judicial system.

Marietta Brew Appiah Oppong, Attorney General of Ghana, said the judges should show good conduct by being impartial in their decision-making, avoid impropriety and being courteous in character.