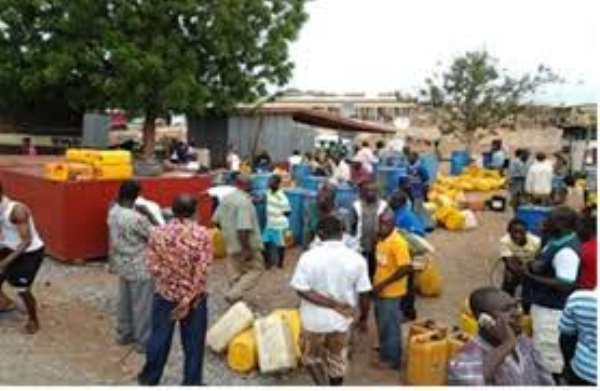 Fishermen at the Teshie fishing port at the weekend identified the high cost of premix fuel as a major problem affecting the local fishing industry and called for immediate intervention.

They noted that recent fuel increment had seriously affected their business as the price of premix fuel had shot up. The fishermen also noted that the sale of Premix fuel at the Teshie fishing port was normally rationed, due to shortages which forced other fishermen from other communities to compete with the locals for the fuel.

“Some unscrupulous business men and women also buy it in large quantities at the expense of the fishermen and re-sell it later at a higher price,” Mr Djanie Isaiah Kotey, Representative of the Chief Fisherman told the Ghana News Agency in an interview in Accra. During a working visit to the Teshie landing site by GNA, the fishermen expressed reservation about sanitation at the beaches, lack of shades and cold store, and the use of lights and exotic machines for fishing.

Mr. Kotey described as unacceptable the practice where people in upstream areas of the sea dropped items into drains and water bodies which were washed into the Sango Lagoon.

He said: 'fishermen are not happy that people are killing the lagoon,' which is a few distance away from the fishing port; 'the situation is also destroying the beauty of the sunny beach'.

He explained that the 'Teshie Sango Lagoon,' used to be one the most beautiful lagoons along the West Coast but it had been destroyed gradually.

The fishermen also noted as a major concern the non-availability of shades for fishermen and fishmongers to sit and rest, while either waiting for the fishermen to return or when mending their nets. 'We have to sit in the scorching sun throughout the day,' they complained.

Mr. Kotey said illegal fishing had also affected them so badly that almost every fisherman at the Teshie port was indebted to a bank, an individual or the government.

'Most people went for loans from banks to purchase the canoe or an outboard motor but because the fish they catch is not enough they are not able to service the loans on time,' he said.

According to him, the Chief Fisherman had presented their grievances to the Ghana National Canoe Fishermen Association Council and the Member of Parliament for the area, and that they were optimistic of positive results.

He also called on the government to come to their aid to arrest those who engaged in illegal fishing. The Teshie Fishermen also appealed to the Member of Parliament for the area to assist them with a cold store facility.

'Now we are forced to sell our catch at a very low price because of the lack of storage facilities.   On the use of light in fishing, Nii King Martey a fisherman explained that as law abiding citizens we are not using torch lights for fishing, even though its affecting our harvest, we hardly get bumper catch as compared to those who engaged in the illegal activity'.

He also complained about the attitude of fishermen from outside the community who used dynamites and exotic machines in fishing.

According to the fishermen, the names were adopted based on either ones religious belief, or due to circumstances or occurrence.

Nii Martey said, he named his canoe after a football club formed by some soldiers and another 'Odo,' to demonstrate his love for his wife.

Mr. William Boadu also said the name of his canoe' Abona 101' was given by his grandfather due to certain circumstances he did not want to disclose to the public. Abona, according to him, was a medicine that strengthened the body. GNA