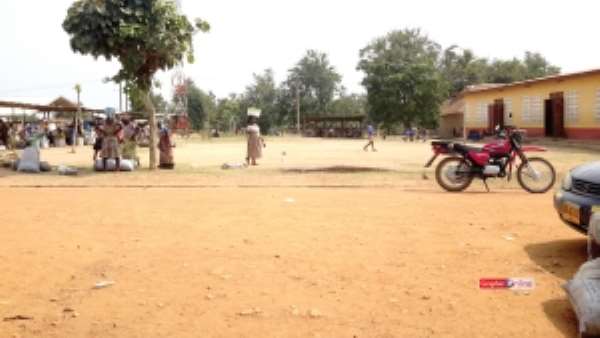 The Donkorkrom Presby Primary and Kindergarten School in the Kwahu North District and the local market virtually operate on the same land with no wall separating the two. As a result, serious academic work at the school is just three days every week.

On Wednesdays, most of the children join their parents on their farms to cart farm produce to the market, and the blurring of loud speakers, coupled with the shouting of traders to attract buyers on Thursdays, which is normally the market day, often renders learning almost impossible.

Apart from the noise, the schoolchildren dash to the market to meet their parents at the least opportunity and some of them never return to the classroom for the rest of the day. School facilities under siege

Some of the traders, mostly those from far away communities, spend Wednesday nights on the school veranda to enable them to sell their goods the following day.

On Fridays and Mondays, the school compound is littered with refuse, mostly from the trading activities, and it takes the pupils a lot of time to tidy up the compound.

Some parents, according to the teachers, out of ignorance, would walk to the verenda while classes are going on and with no regard for the teacher, talk to their children. Checks by school authorities

Efforts by school authorities to keep traders at bay have proven futile,  as they freely use the school compound and the veranda as a resting place or as a place to check their daily sales.

The school has to keep its washrooms under lock and key to keep the traders at bay since the current market place does not have washrooms.

As a result, the traders have resorted to urinating anywhere and, in the evening, under the cover of darkness, defaecating around the school compound.

Fitting shops, which are very close to the school, create a lot of noise as they test vehicles brought for repairs. Sometimes, the mechanics  move close to the school wall and the school has to create a border to prevent them from using a certain area as a repair ground and also as a bus stop for loading passengers by 'trotro' and taxi operators. Temporary market

"It is by the  grace of God that we are able to keep the  children in the classrooms on Thursdays," the headmistress of the school, Madam Ernestina Ampadu, who confirmed the story, told the Daily Graphic last Thursday in an interview.

According to her, all the relevant authorities at the district assembly "and indeed, all the authorities who are supposed to know are aware of this situation."

Unfortunately, the assembly could not respond to the issues raised by the school as the District Chief Executive had left a message that he was not well and, therefore, could not talk to this reporter after a number of attempts to talk to him failed.

Explaining the situation,  Madam Ampadu said the original market was under renovation, "and we were assured that the current place would be temporary, but this has continued for almost two years now." The market and schoolchildren

The assistant headmaster of the school, who is also the class six teacher, Mr Michael Opoku, described the situation as disturbing,  adding that he had decided to resort to dictating notes for the children on Thursdays.

He said because of the noise from the traders, concentration was very low among the children on such days and was hopeful that the renovation works on the market would be completed soon.

“On Thursdays, the concentration level of the children is very low as they have divided attention. Some of the children unconsciously will get up to dance to the music played from the loud speakers used to sell medicines and other products,” he said.

The school authorities said the school could not do much to prevent the situation where the schoolchildren helped their parents on Thursdays to bring their farm produce to market, since that was the way parents were able to make money to take care of the children.

Mr Opoku explained that most of the students were staying in town alone while their parents lived in the villages and only came to town on the market days to visit the children.