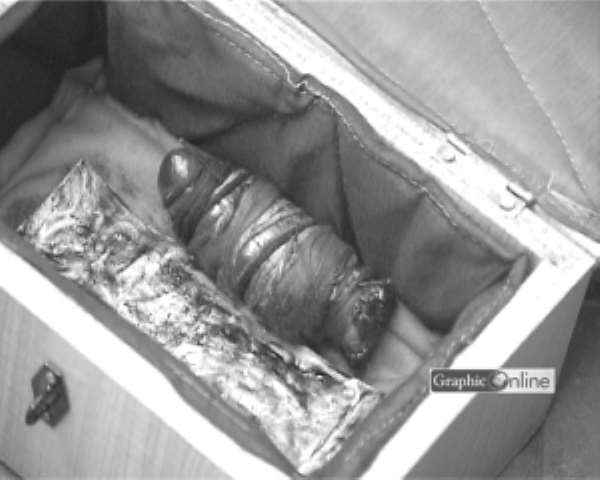 The initial suspicion of the police that a 21-year-old man they had arrested was allegedly in possession of human flesh changed when investigations showed the flesh was that of a bird.

The man, Edmund Opoku, had been arrested by a police patrol team.  Flesh suspected to be human parts

The Divisional Commander of the Accra Central Divisional Police, Chief Superintendent, Mr Joseph Oklu Gyamera, told the Daily Graphic that the patrol team saw Opoku carrying a box and they asked him to disclose its contents. The wooden box contained items including a piece of flesh suspected to be human part.

However, investigations and examination of the flesh revealed that it was the heart of a bird. Magic box

The items in the box, which had been wrapped and was described by the suspect as a “magic box”, emitted an unpleasant odour.

Upon interrogation, Mr Gyamera said the suspect told the police the items had been given to him by a man he had contacted through Whatsapp, a social media platform, on his mobile phone.

According to the commander, the manufacturer of the 'magic box', who has been identified only as Omkara, had told the suspect that he could help him to become rich if he paid GH¢100,000.

An initial payment of GH¢1,500, Mr Gyamera said, was to be made through MTN mobile money, as Omkara lived in Tamale.

While the suspect was having difficulty raising the money, Omkara was said to have sent him the 'magic box' via a Metro Mass Transit bus. The risk

After collecting the box on January 5, 2013,  the suspect, who is a squatter at the Tema Station, was faced with the challenge of obeying the directive of “not allowing any other person to have access to the box and its contents or risk not getting the riches”.

The suspect told the police that late in the night  he was arrested, he had been looking for a place to hide the items.

Investigations by the police revealed that Omkara and Opoku had been chatting via Whatsapp since early December 2013 and that Omkara had been deceiving the suspect to think it was a form of 'Sakawa' that could help him acquire money.

'Pushing for nuclear power in Ghana is wasteful and ill-advi...
44 minutes ago