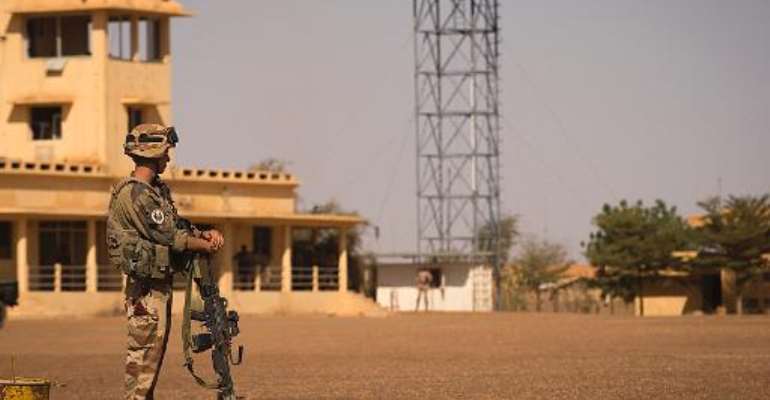 A French soldier stands at the French military base of Gao on December 31, 2013. By Joel Saget (AFP/File)

Washington (AFP) - The United States Tuesday praised France's "key" role in helping to quell unrest and extremist violence in parts of Africa as French President Francois Hollande was welcomed on a state visit.

"The French role has been key to achieving success in Mali, and the French role in trying to bring about security and peace in CAR is very, very important," the US top diplomat for Africa, Linda Thomas-Greenfield said.

Washington was "very supportive" of France's efforts in Mali and the Central African Republic (CAR), she added, denouncing "horrifying" reports of recent lynchings in the latter country plagued by Christian and Muslim revenge attacks.

"It just highlighted for me and others how urgent the situation is there," she said.

Hollande held talks at the White House with US President Barack Obama on Tuesday.

He was greeted with a 21-gun salute and full military honors on the chilly South Lawn of the White House, before discussions on issues ranging from Iran to climate change, trade to combating Islamist threats.

When she visited the country in December with US ambassador to the United Nations Samantha Power, Thomas-Greenfield said, "we started to see the rising level of frustration that people express because of the lack of security."

The African peacekeeping force MISCA has already sent some 5,400 of 6,000 planned troops, and some 1,600 French soldiers are on the ground in the CAR. The EU has promised to deploy 500 troops to the capital Bangui at the beginning of March.

"We agree that the number of troops in CAR need to be increased to address the very complex security situation," said Thomas-Greenfield, in an online discussion with reporters from around the continent.

The US "will continue to work with the French government and partners in the European Union to ensure we bring about a level of support that will bring peace and security to CAR."

While the United States has not provided any forces on the ground, it has helped airlift French troops both into Mali and the Central African Republic.

It has given some $100 million to support the military efforts to end the violence in CAR and also given some $45 million in humanitarian aid to the people.

Top US spy chief James Clapper also praised France before US lawmakers, saying "they have a great access and they have a strategy in which they want to pursue terrorism."