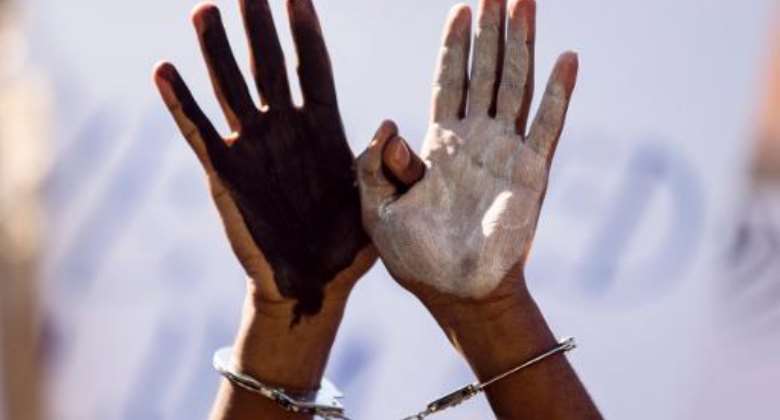 An African asylum seeker takes part in a protest in front of the Israeli Interior Ministry in the Mediterranean coastal city of Tel Aviv on February 11, 2014. By Jack Guez (AFP)

The loosely governed desert region stretching from eastern Sudan up through Egypt to the Sinai Peninsula is a major trafficking route for African migrants seeking jobs. Thousands of Eritreans flee each year, with many heading for Israel.

Human Rights Watch said it had recorded 29 incidents dating back to 2010 in which victims accused Sudanese and Egyptian security officers of facilitating traffickers' abuses rather than rescuing victims.

"Both Egypt and Sudan need to put an end to torture and extortion of Eritreans on their territory, and to prosecute traffickers and any security officials colluding with them," Gerry Simpson, a senior refugee researcher for the group, said in a statement.

Egyptian and Sudanese officials could not immediately be reached for comment.

The report is based on the testimonies of 37 Eritreans interviewed by the international rights group and 22 others interviewed by a non-governmental organisation in Egypt.

Human Rights Watch said it had also spoken to two traffickers, one of whom admitted he tortured dozens of people.

Eritreans told the rights group that Sudanese police in the remote eastern town of Kassala intercepted them near the border, arbitrarily detained them, and handed them over to traffickers, including at police stations.

Some of the victims also said they had seen Egyptian security officers colluding with traffickers at checkpoints, at the heavily-guarded Suez Canal and even in traffickers' houses.

The victims said the Egyptian traffickers had tortured them to extort up to US$40,000 from their relatives.

Rights group Amnesty International said in April that Eritrean refugees kidnapped in Sudan are raped, beaten, chained up and sometimes killed after being forcibly transported to Egypt's Sinai Peninsula, where they are held for ransom.