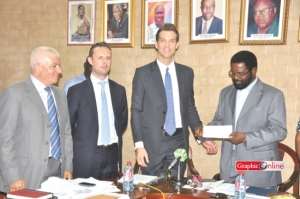 The amount is expected to be invested in the construction of a Millennium City School facility at Gbegbeise in Accra.

According to the Sales Manager of KHL, Mr Robert Davis, who presented the cheque on behalf of his company, the gesture was in line with the company's corporate social responsibility.

He said the community of Accra and its authorities had provided a conducive atmosphere which had helped Movenpick to function perfectly.

Mr Davis explained that the friendly environment the company operated in continued to help it to chalk up great successes, as well as create employment for many Ghanaians.

Receiving the cheque on behalf of the assembly, the Chief Executive of the AMA, Mr Alfred Okoe Vanderpuije, lauded KHL for  providing the money and for its contribution to employment creation.

He gave an assurance that the money would be invested in the construction of a school facility at Gbegbeise and appealed for more support from corporate institutions.