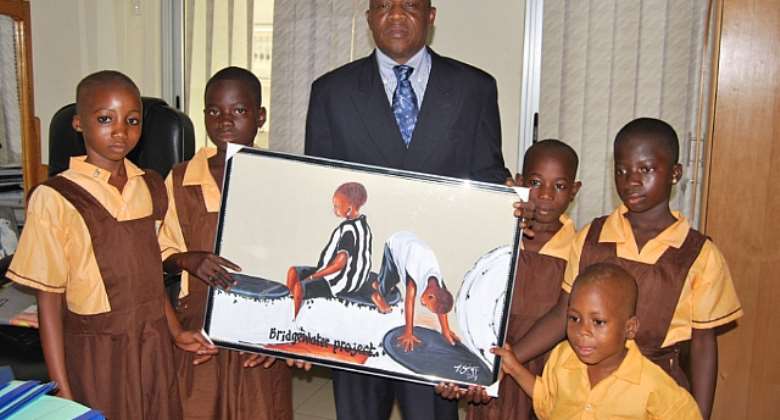 Justice Atuguba With Some Of The Children

A Supreme Court judge, Justice William Atuguba, has endorsed an initiative aimed at educating disadvantaged head porters and displaced children in the country initiated by the Pamela E. Bridgewater Project.

The campaign to enroll the head porters, who are commonly referred to as kayayei, is dubbed 'Sponsor Kayayei to School Program'. It is aimed at sponsoring the education of under-aged girls, who have migrated from the northern sectors of the country to the south in search of menial jobs.

The 'Sponsor Kayayei to School Program' would also enroll baby-sitters of wards of kayayeis and other displaced children, who are left to roam the streets of suburbs in Accra without any hope of ever being educated.

The eminent jurist at a ceremony to endorse the program said that Ghana's democratic credentials cannot be enhanced when humanitarian values and respect for the unfortunate segment of the populace are undermined.

He said claims of being democratic and of being highly civilized by Ghanaians should not only be seen in the accumulation of material wealth, but the pursuit of social justice is equally important in every society.

Justice Atuguba said social harmony and cohesion can be achieved when conscious efforts are made by the state and the private sectors to initiate policies that are friendly to the poor.

He said gains made in the democratic arena should not only be seen in terms of peaceful changes in government and handover. According to him the social state of people who cast votes during elections should be highly considered.

He said it is morally imperative for the rich in the country to continue to remember and show love to the poor and less fortunate, who go through difficult moments to make a living.

Justice Atuguba called on corporate institutions and individuals to join the campaign to give education to the young girls to make them responsible citizens in the future.

The communication officer of the Pamela E. Bridgewater Project, Mr. B.M. Bulmuo, who agreed with Justice Atuguba said societies should not just be built on political values but social values as well.

He said the 'Sponsor Kayayei to School Program' aims to sponsor several disadvantaged girls to school in the coming months.

He appealed to the Ghanaian public to show their humanitarian side and generously support the 'Sponsor Kayayei to School Program' to make it a success.

Five children, who are beneficiaries of the program, were presented to Justice Atuguba at his office at the Supreme Court. Are Hamdiya Abubakr, Hubayda Mumuni, and Fadila Yakubu have been enrolled to start school at the Kubori RC primary school, whiles Seidu Saduh and Murjana Zakariya would be at Get Forward International School at Kubugu, in the Mamprusi-Moagduri District of the Northern Region.

Ya-Na commiserates with Mahama
59 minutes ago