Looting a way of life for C. Africa's lost generation 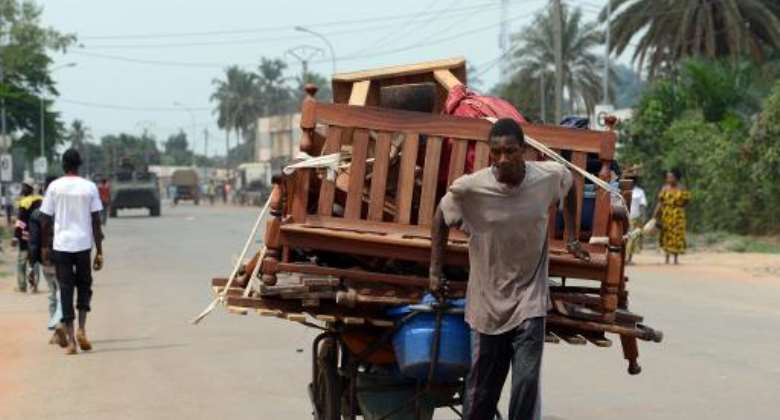 A man pulls a cart full of pieces of furnitures he looted as he walks near a convoy of French soldiers on February 9, 2014 in Bangui. By Issouf Sanogo (AFP)

It was already one of the world's poorest nations before last year's coup but now the Central African Republic is plundering itself into extinction.

Jean-Gabriel Alaba, a computer scientist who lives with his family in the capital Bangui, said it should not come as a surprise that youngsters bite the hands that failed to feed them.

"Central Africa has sacrificed the future of its young generation on the altar of political gamesmanship. The future of our children is getting ever darker," he said.

"What is happening now -- young people committing massacres, pillaging, raping, stealing -- was predictable. It's because school never gave them anything."

In recent months, scenes of plundering by marauding armed groups or frenzied local youths have been a daily feature in the riverside capital and other cities.

It was soon after the mainly Muslim Seleka rebel coalition entered Bangui and toppled then president Francois Bozize in March 2013 that rogue insurgents began looting.

In February 2014, nearly a year on, foreign military contingents have moved in and ex-Seleka warlords are on the back foot, but Christian vigilantes have taken over the pillaging.

In their wake, loose gaggles of local youths scavenge for unclaimed and often worthless loot, venting their rage by destroying everything they cannot take with them.

For some of them, it is the closest thing to a job.

"It's outrageous, Sangaris is preventing us from looting," an indignant looter told AFP, giving his name only as Benjamin.

He was referring to the military operation France launched two months ago. The aim was to prevent its former colony from sinking even deeper into chaos but the violence has continued to escalate.

The Central African Republic's generation of looters is the product of a failing educational system.

In a country where 40 percent of the 4.6 million inhabitants are under 14, an insolvent school system in ruins has had devastating consequences.

The gaps in the academic calendar mirror the endless mutinies, rebellions and coups that have stunted the development of state institutions and kept most of the country in dire poverty.

The landlocked nation's vast mineral reserves have remained largely untapped, and infrastructure is often non-existent. Only around five percent of the population has access to electricity.

'Our children are halfwits'

Even before the turn of the century, successive cash-strapped governments chronically failed to pay salaries to their civil servants, teachers included, leading to strikes that further deprived students of learning time.

"Because of the 'blank years' of the nineties and political instability of the following decade, all our children are halfwits. They have an unfair handicap," said Jean Zato, a Bangui carpenter.

"All this needs to stop, for Christ's sake, our children have a lot of catching up to do," he said.

On January 20, the day she was picked as interim president, Catherine Samba Panza stressed that all the fighters and looters should be considered "children" of Central Africa.

She replaced Michel Djotodia, the ex-Seleka boss who had been reluctantly accepted by the international community after ousting Bozize but was eventually sidelined by his regional peers when his inability to contain the chaos became evident.

The administration is still mostly paralysed, however, and many schools have yet to reopen.

"These days, if you don't leave the country to study, you don't stand a chance," said Emery Danzou, a high school student who has been at loose ends for months.

"But not all parents can afford that. We lot, well... we have to live with it," he said.

His friend Arlette Ndetie hopes to join the school exodus. "All my friends have gone abroad, because we just can't take it here anymore," she said.

"I'm looking hard for a way of getting to Senegal or Benin. Leaving is the only solution."

Officer arrested for forcefully kissing the thighs of woman ...
35 minutes ago