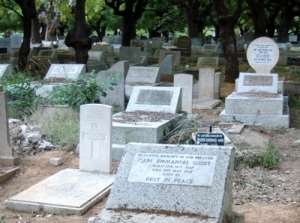 Small Scale illegal Miners (popularly referred to as galamsey) have desecrated about 30 graves belonging to the people of Kpalsko-Zangoyiri in the Bawku-West district of the Upper East Region.

Quite apart from this, the illegal Miners have not spared an area of about five kilometers radius destroying trees and water bodies in the course of their activities.

The Bawku- West District Police Commander, Assistant Suprintendant of Police (ASP) Mr. Christian Dogbatse said those arrested would be screened and those found culpable would be processed for court, indicating they will be charged for mining without license as well as conspiracy to engage in illegal mining.

He said following the directive from the Presidency for the various Security Committees of the Metropolitan, Municipal and District Assembles to combat the menace of galamsey in their jurisdictions, the Bawku-West District decided to embark on a sensitization campaign to educate the miners on the dangers of illegal mining and on the need to stop their activities.

He said those at Zangoyiri  did not heed to their appeal and continued degrading the environment and coupled with persistent complaints from the people DISSEC embarked on an operation leading to the arrest of 34 people but said the miners numbered about 500 in the area.

He said the DISSEC in collaboration with the Police High Command would continue with the operations until the small scale illegal miners were flushed out from the district.