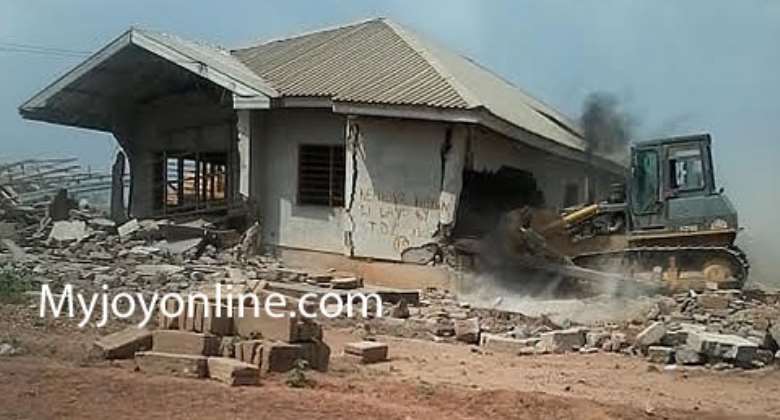 The Speaker of Parliament has charged two committees in Parliament to investigate the circumstances under which the Tema Development Corporation demolished houses at Adjei Kojo a suburb in Tema.

The Works and Housing Committee, the Constitutional and Legal Committee Chairman of the Lands and Forestry Committee, including Mr Alban Bagbin and E.T Mensah have a month to provide the House with a report on how the victims acquired the land and why the houses were demolished several years after they were built.

Thousands of residents of Adjei Kojo now sleep in the open with few putting up in tents provided by the National Disaster Management Organisation after their houses were flattened.

The residents, some of whom had stayed at Adjei Kojo for over a decade were deemed illegal settlers who encroached on the land.

The issue has become a subject of debate on the floor of Parliament with some members condemning the action by the TDC, who claim to be rightful owners of the land.

A statement read by the Member of Parliament of the area Irene Naa Toshie Addo said over 500 houses in the area were flattened in the demolition exercise carried out by the TDC and supervised by a combined team of police and military personnel.

Over 2000 residents were rendered homeless as a result of the exercise, she stated.

According to her, the TDC were inhuman and even irresponsible in carrying out the demolition because they had not undertaken the basic steps necessary before undertaking such a far reaching action.

She said the TDC failed to acquire the necessary permit to undertake the demolition and also did not submit the necessary notifications before pulling down the structures.

Joy News' Parliamentary Correspondent  Elton John Brobbey reported that due to the sensitive nature of the matter the Speaker Doe Adjaho only allowed the leadership of the house to speak on the floor.

Some of them questioned how the victims acquired the land and the circumstances under which they built the houses on lands purported to be owned by the TDC.

The Speaker subsequently directed Committees to look into the matter and report back to house within a month.