US urges C. Africa to end 'cycle of violence' after lynching 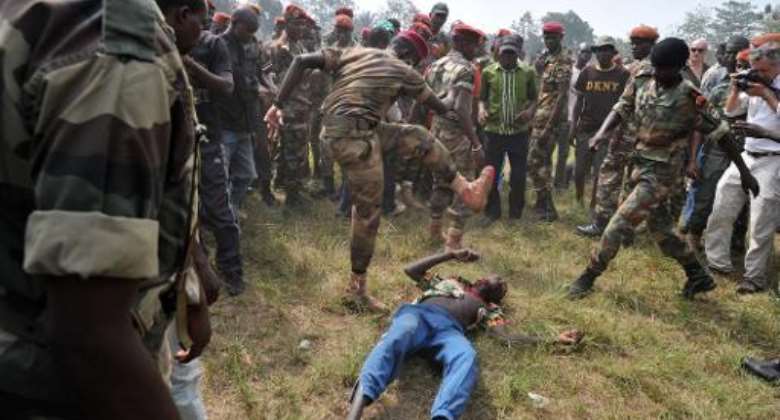 Members of the Central African Armed Forces (FACA) lynch a man suspected of being a former Seleka rebel on February 5, 2014, in Bangui. By Issouf Sanogo (AFP)

The United States urged the nation to "break the cycle of violence" and halt revenge attacks, voicing concern about ongoing clashes between Muslims and Christians.

"This sectarian violence must end," said US State Department spokeswoman Jen Psaki in a statement.

"The people of CAR must seize the opportunity afforded by its newly appointed transitional leadership and a strong level of international support to end the present crisis and move toward a stable and peaceful society."

The lynching incident underscored the ongoing chaos in the country since the mainly Muslim Seleka rebel alliance seized power last March, launching a campaign of murder, rape and looting against the Christian majority.

The unrest unleashed a wave of tit-for-tat inter-religious violence that has displaced around a million people and left thousands dead.

Washington and other countries and international organisations "will support the efforts of the transition government to end the conflict and re-establish a functioning state", Psaki added.

The gruesome attack came immediately after the end of the military ceremony in the capital Bangui attended by senior army and government officials.

Uniformed soldiers attacked a young man in civilian clothes, stamping on his head, stabbing him and throwing stones at him, witnesses and AFP journalists said.

"He's a Seleka (ex-rebel)", "He has infiltrated", the officers could be heard shouting, as they were quickly joined by an angry mob.

The victim's body was then dragged through the streets as troops from the African Union-led MISCA mission, who had provided security at the ceremony, looked on.

Witnesses said the body was dismembered and burned before the MISCA troops finally intervened to disperse the crowd with tear gas and shots in the air.

Just moments before the brutal lynching, Samba Panza had told the crowd of around 4,000 troops and dignitaries gathered at the National School of Magistrates of her "pride in seeing so many elements of the Central African Republic Forces reunited".

She also assured the troops that talks were under way with international partners to settle their wages, unpaid for five months, and get them the equipment they need "so they can fulfil their mission of securing Bangui and the national territory".

The high-profile ceremony was supposed to have marked the return to duty of troops dispersed since the coup that brought rebel leader Michel Djotodia to power.

He was forced to resign on January 10 under pressure from the international community over his inability to halt the violence between rival Muslim and Christian militias.

Samba Panza, a Christian who is tasked with restoring stability, kept some key figures from Djotodia's government, including the minister who liaises with French and African troops deployed to end the bloodshed.

In Bangui, Seleka fighters have been largely neutralised by 1,600 French soldiers deployed in Operation Sangaris, an intervention launched on December 5 to bolster the now 5,500-strong MISCA mission.

But the French and African troops operate mainly in the capital, while the Muslim-Christian bloodletting continues in the interior.

Wednesday's ceremony was attended by senior members of the transitional government and armed forces, as well as General Francisco Soriano, commander of French forces in the country, and General Atanase Kararuza, deputy commander of MISCA.

A spokesman for the Sangaris force told AFP that the French troops present at the ceremony were not tasked with providing security but were only there to "assure the protection" of General Soriano.

Before the ceremony descended into violence, several Central African soldiers had told AFP they welcomed the chance to help restore stability in their impoverished country.

"We are motivated," said Sergeant Melaine Gabalakosso, adding that it was "the politicians who created divisions in our country".

But he warned: "Of course, there may be isolated incidents, especially if one of us comes across one of those who did the looting."