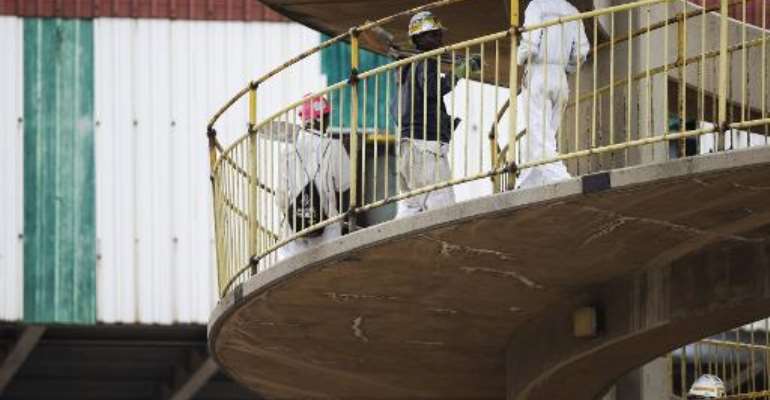 South African gold miners arrive to work on February 5, 2014 at a mine in Doornkop, west of Johannesburg, where a mining accident has left nine miners trapped underground. By Marco Longari (AFP)

Nine of the 17 workers initially trapped by the blaze are still missing, the company said, after eight were rescued from an underground refuge bay earlier Wednesday.

The fire broke out about 1.7 kilometres (over one mile) beneath the surface at mining firm Harmony Gold's Doornkop operations late Tuesday, and may have been triggered by a seismic event.

"Rescue services found eight people this morning in a refuge chamber. They have since alighted to surface and they are healthy," company CEO Graham Briggs said, adding that the workers were receiving medical care.

Nine others were still missing, he said.

"We have about eight rescue teams underground," Briggs told AFP.

"The search will continue until we find them."

The rescue effort was being hampered by "smoke and a subsequent fall of ground", the firm said in a statement earlier.

Briggs could not give a time scale for the rescue operation.

"Half the teams... are fighting the fire, the other half are trying to do recces (reconnaissance) and get into some of these areas," he said.

The National Union of Mineworkers said a 2.4-magnitude seismic event -- perhaps an earthquake -- triggered a chain reaction that led to the blaze.

"It resulted in the collapse of underground rocks which caused damage to ventilation pipes, electric cables and water pipes," the union said.

"The damage to electric cables triggered a fire underground which is still burning," said the union's health and safety official Erick Gcilitshana.

"We appeal to the rescue teams to do their best to fast-track the operation of searching especially (given) that the compressed air and water pipes are affected."

Despite efforts to reduce them, accidents are still common in South Africa's ultra-deep gold mines.

One hundred and twenty eight people were killed in 2010, according to the latest figures published by local NGO Miningsafety.co.za.

Locating miners is often a race against time. Many large mines use helmet-based transmitter systems to ensure rapid recovery.

Operations at the Doornkop mine have been suspended.

The single-shaft mine, which operates up to two kilometres deep on the Kimberley and South Reefs, produced 3,631 kilogrammes of gold in 2013.

South Africa's gold mining has steadily decreased over the past 40 years, sliding from top global producer to world number six.